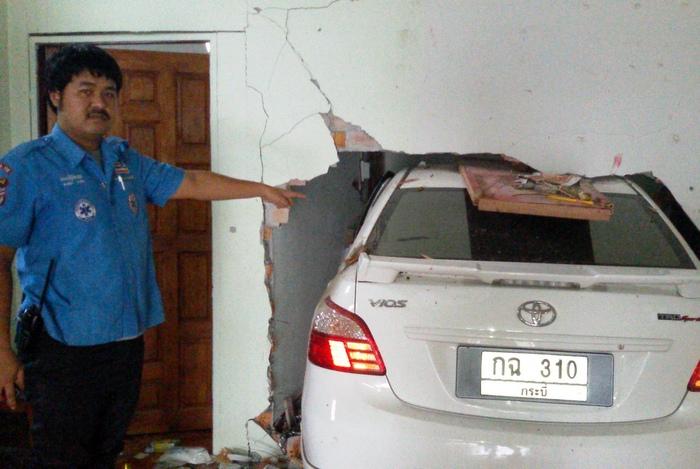 KRABI: A sleeping family received a rude awakening when an out-of-control car crashed through their bedroom wall.

Krabi City Police Lt Col Chatchai Nakpaksri said the crash, reported by Krabi Town locals earlier this morning, collapsed a wall of the family’s bedroom and crushed the front door of the home.

“Pratin Tamkaew told us that early this morning, while she was asleep with her husband and daughter, the car came crashing into their bedroom,” Lt Col Chatchai said. “Her husband, Tanakorn Yutthaworawit, 54, was hit in the abdomen and slid under the car.”

“Krabi Pitak Pracha Foundation rescuers had to use a hammer to get inside the bedroom to help Ms Pratin and her daughter, who suffered head injuries and some minor wounds on their bodies. Mr Tanakorn was taken to Krabi hospital,” Col Chatchai said.

All family members are reported to be in stable condition.

“The driver, Kittiyakorn Sitthisit, 27 told first responders that she had just left her friend’s house, at an intersection near the crash, when she lost control of the vehicle. She is willing to pay for the damage,” Col Chatchai said.