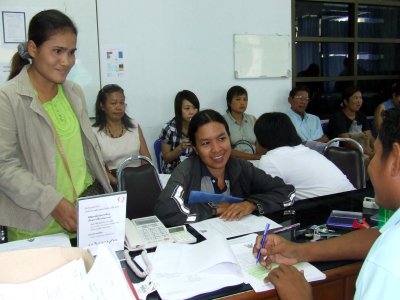 PHUKET: In a bid to get more members of Phuket’s huge alien workforce legally registered, the Phuket Provincial Employment Office has announced it will open a “one-stop” registration center at its offices at Saphan Hin.

Employment Office chief Noppadon Ployyoudee explained to a recent meeting of provincial officials that before Parliament was dissolved Cabinet passed a resolution that extended the registration period for low-wage workers from the neighboring states of Burma, Cambodia and Laos by one year.

Under the extension employers will have 30 days, from June 15 to July 14, to submit their Tor Tor 1 registration forms, which state their intent to hire alien laborers.

There will be a 90-day period, from June 15 to September 12, for the workers to have health checkups at government hospitals to qualify for the state health care system.

Once these two steps are completed, employers will have from June 15 until October 12 to apply for work permits.

Before they can apply, workers must also obtain proof-of-citizenship documents from their home country.

For the Burmese workers who make up about 99 per cent of the local alien low-wage workforce, the process involves first submitting applications to Phuket Provincial Employment Office. From there the applications go to the Bangkok office, to the Embassy of Myanmar Thailand, to Yangon and onward to provincial offices in Burma.

It takes at least two months before identification certificates are returned.

After receiving the documents, the workers can apply for temporary passports at the Kawthaung (Victoria Point) immigration checkpoint opposite Ranong, Thailand.

The temporary passports are valid for three years and the workers are eligible for two-year, non-immigrant visas when they cross back into Thailand.

No Tiger in the Open