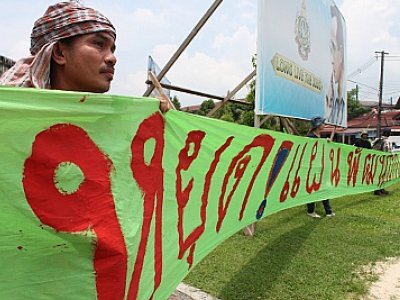 PHUKET: The mobile Cabinet meeting headed by Prime Minister Yingluck Shinawatra drew to a close yesterday to the sound of another protest.

Under the banner of the “Southern Network”, the protesters gathered outside the meeting venue at the Prince of Songkla University (PSU) Phuket Campus in Kathu.

The group had traveled from Satun, Songkhla and Chumphon provinces to call for the government to hold public hearings on major projects that greatly affect local people, including the Phang Nga “Land Bridge” gas pipeline project and the Pak Bara Deep Sea Port in Satun.

Pak Bara is the also the main ferry terminal recently built to facilitate travel for the many tourists traveling to Tarutao National Park and Koh Lipe.

Wichoksak Ronarongpairee, a Pak Bara resident, told the Phuket Gazette, “The proper process for many government projects is not being followed. Regulations are being ignored, such as the requirement to hold public hearings as a condition of fulfilling the Environment Impact Assessment (EIA) process.

“The Pak Bara Deep Sea Port Project is just one example. The project cost 30 billion baht, and there were never any public hearings. The project passed its EIA right away. That means it is illegal,” he said.

Mr Wichoksak said there were many other major development projects under consideration that would greatly affect local residents, including their health.

He also warned that continuing to approve major projects without following the proper procedure could result in local residents’ needs and concerns being shoved aside in favor of foreign investment.

“If we do nothing to protect our land, it will be the same as in Map Ta Phut in Rayong. All of the industrial business owners there are foreigners. Meanwhile, the local people were left with nothing. We all know how much the people in Map Ta Phut suffer,” Mr Wichoksak said.

He also called the proposed Land Bridge project to question.

“The government promotional campaign made it look fantastic. The project will deliver enormous benefit to the people involved.

“But Satun will see industrial estate operators invited into Phuket and Phang Nga to join the ‘Thailand Riviera’. If the Cabinet approves the project, we will see more of our people leave.