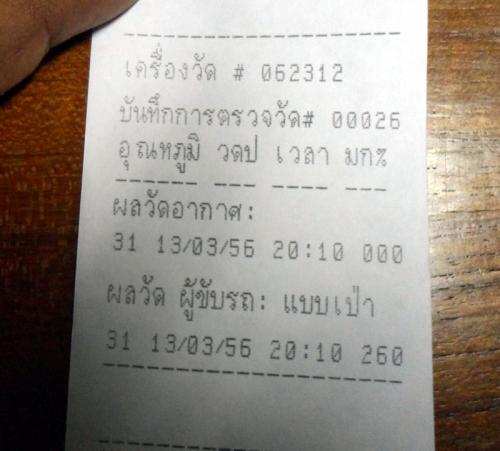 PHUKET: Police arrested a drunk bus driver returning from a drop-off of tourists at Phuket Airport last night. The arrest occurred after he clipped a pick-up truck near the airport and was chased down by the driver of the truck.

Sirisak Suksai, 48, was driving the truck on Thepkrasattri Road near the airport when his vehicle was clipped by the tour bus, which bears the name of its owner, Charoenporn Kaewbuppha, on its side, said Thalang traffic policeman Suthee Maneesing.

“Mr Sirisak chased the bus until he reached the Thalang Museum near the Heroines Monument in Thalang. There, the bus stopped, so he [Sirisak] got out of his vehicle to talk to the bus driver,” he said.

Sen Sgt Maj Suthee received the report at 7:30pm and went to the scene.

“When I arrived, I talked to the bus driver, Ayan Noppawong Na Ayutthaya, 55. He told me he had just finished taking tourists to the airport. He could not give any more information and talked in a confused way.

“I could smell alcohol on him. I asked to see his driver’s license but he did not have it with him,” Sen Sgt Maj Suthee said.

Mr Ayan was then taken to Thalang Police Station and given an alcohol test.

“He registered .26 per cent, which is above the legal limit of .05 per cent. He was charged with drunk driving and driving with no license,” he said.

Mr Ayan faces drunk driving penalties of up to one year in prison, a fine of 5,000 to 20,000 baht, and a six month suspension of his driver’s license, Sen Sgt Maj Suthee said.

“The judge may also use his discretion to levy additional penalties, such as community service,” he added.