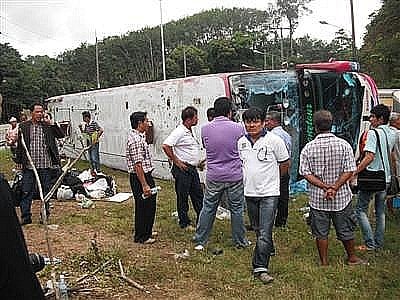 The bus was en route to Krabi when the accident occurred on a sharp curve known locally as “Chong Kub Tha Yu“, located on the road from Lo Yung to Tha Yu in Takua Thung district.

District police were informed that the bus had overshot the curve and overturned at 11am.

Together with rescue workers and medical staff from Takua Thung and Phang Nga hospitals, they found a purple-and-white, double-decker tour bus on its side on the median strip.

A total of 35 people were injured, but only one was listed as being in a serious condition: 57-year-old Aubdulrornueng Hareemoa, director of Baan Galae School in Yee Ngor District, Narathiwat.

Rescue workers listed 10 other people as suffering “medium” injuries and 24 with minor injuries. All were sent to Takua Thung and Phang Nga hospitals for treatment.

An initial police investigation revealed that the bus was driven by a man named “Mr Seng”, surname unknown.

The bus was part of a convoy that included one other coach and two vans. Each bus carried 45 people and each van 15, all school directors and education officials. Those in the other vehicles continued the journey back to Narathiwat today.

The cause of the crash was given as “unfamiliarity with the road”. The coach was travelling at such a speed that it slid for 20 meters after overturning.

Police officers are continuing their investigation into the cause of the accident, possibly in recognition of the fact that “unfamiliarity” with a road does not cause accidents.