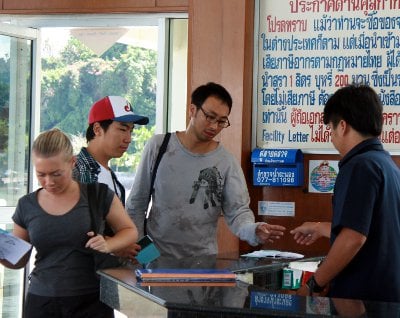 PHUKET: More than half of all respondents to a Phuket Gazette online poll have voted for options other than making the obligatory, and often dangerous, visa runs that are required every 30 to 90 days in order to continue their stay in Thailand.

Nearly a quarter of all respondents, including Thai nationals, preferred foreigners to present themselves to the Phuket Immigration Office and pay a fee directly to the Thai government.

The Gazette posted the poll after a reader suggested that foreigners should make blood donations in lieu of visa runs. After pointing out that there were many other ways foreigners living in Phuket could be of help to society, the poll asked, “Which of the following options do you think is acceptable for a foreigner to earn an extension to their stay in Thailand?”

Overall, 17.9% replied that making a blood donation once every three months would be fair, while 10.8% said that volunteering for community projects for one morning a week would be appropriate.

Only 4% of respondents thought that making themselves available to undertake translation services for public and private-sector organizations would be the way to go, but 23.4% said they would much prefer to pay an official fee of 2,000 baht directly to the Immigration office.

A startling revelation – considering the volume of complaints the Gazette has received over the years arguing against the need to make visa runs – was that 44% of all respondents, including resident expats living on the island, voted, “None of the above as the current system works well and doesn’t need amending.”

Another statistic that highlighted the importance of the issue was that 1,489 readers voted in the poll, making it one of the most popular online polls ever conducted by the Phuket Gazette.

In light of the furor over the massive new year beach party proposed to be held on Surin Beach, the latest Gazette online poll asks, “Should Phuket host mega-event beach parties, such as the Paris Hilton mega New Year Party at Surin Beach?”

The original pie chart omitted the 17% of participants that voted for making a blood donation once every three months, which created a graphic misrepresentation of the poll. The error is regretted.