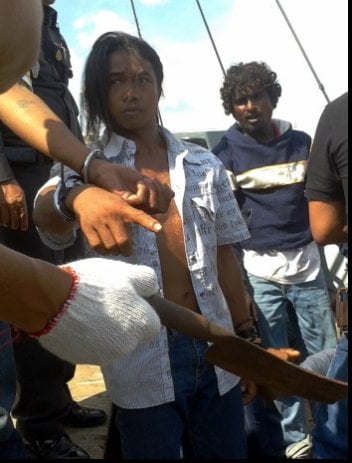 PHUKET: A mutinous Burmese fishing crewman has confessed to Phuket Police that he hacked to death the ship’s “cruel” Thai captain before attacking the vessel’s technician, who jumped overboard and is presumed dead.

The crew of seven Burmese were found yesterday aboard the fishing vessel Wor Suphaporn, stranded off Mai Thon island.

“Nud”, 25, confessed to Phuket Police that on October 12 he murdered “Mr Lue”, captain of the vessel, with a butcher’s knife and dumped his body in the sea.

He then turned his attention on Mr Lek, the ship’s Thai-national technician, and “caused his death” by attacking him and forcing him to jump overboard in Indonesian waters.

The owner of the Wor Suphaporn – sailing out of Gantang, Trang Province – reported to Marine Police Division 8 Panya Chaichana that they lost contact with the vessel on October 13.

Fearing a pirate attack, Lt Col Panya launched a search for the vessel. It was soon spotted off the southern end of Mai Thon Island, between Phuket and Phi Phi Island.

When police boarded the ship, they found the seven Burmese crew members but no sign of the captain or technician.

Upon investigation, police found bloodstains in the cabin and control room.

Nud, the helmsman of Wor Suphaporn, confessed to the murder of Mr Lue and Mr Lek.

He killed the captain because he was constantly abusive, verbally and physically. He couldn’t take it anymore, so he grabbed the cleaver and hacked Mr Lue to death, police quoted him saying.

After murdering the pair, the crew headed for Phuket, where Nud planned to go ashore and disappear into the huge population of Burmese migrant workers.

“Mr Nud’s intention was to stop in Phuket and run, but he mistakenly landed the boat at Mai Thon island, thinking it was Phuket. Luckily, we spotted him right as he approached shore,” Lt Col Panya said.

The Wor Suphaporn had been at sea in Indonesian waters for about five months.

Phuket City Police Duty Officer Jessada Saengsuree told the Phuket Gazette today that his office will announce this afternoon what charges will be filed against the seven men.

They are currently being held at Phuket City Police Station.