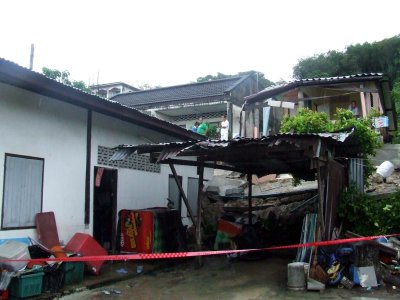 PHUKET: A Phuket community leader was badly injured this morning when a landslide caused part of a neighboring home to come crashing through his bedroom wall as he lay watching television.

At about 9:30am today, 38-year-old Witsanu Yidsua was in his bedroom at the back of his home on Phisit Gorani Road when the tragedy occurred.

Mr Witsanu, president of the Ban Mon Community Council, is leading the fight against a plan to bore a tunnel under Patong Hill that would require the construction of a large overpass over his community.

His home is located near the The King’s Footprint Monument on Phisit Gorani, not far from the 50 Pi Road junction.

Boonchuay Yidsua, the victim’s older brother, said, “Our mother, a grandchild and I were at the front of the house when we heard a noise we thought was a thunderbolt. Then our neighbor rushed over to tell us that there had been a landslide at the back of the house.”

“I ran immediately to find my brother Witsanu in his bedroom. All I could see was his bloodied head, as the rest of his body was covered with debris including a cupboard and big chunks of concrete wall,” he said.

Mr Witsanu, who was conscious when rescuers arrived, was rushed to Patong Hospital. Surgeons there had to use fifty stitches to close his head wounds and removed numerous small stones that were embedded in his scalp.

He is scheduled to undergo an MRI scan to see if there was any damage done to his brain.

Officers from the Patong Police examined the scene and asked witnesses to come to the station for questioning, he said.