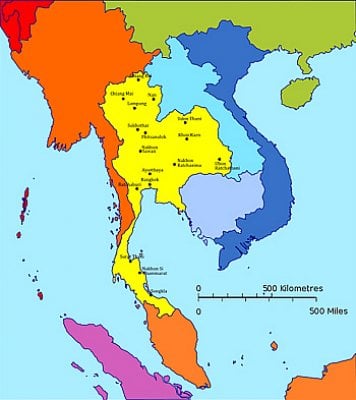 – news about Thailand compiled by Gazette editors for Phuket readers

The death toll as a result of widespread flooding across Thailand in recent months has risen to at least 212, according to the latest reports released on yesterday.

In addition, Phranai, who also serves as the director of the 24/7 Emergency Operation Center for Floods, Storms and Landslides, said weather forecasts indicate that tropical storm Nalgae will hit northern Vietnam on Wednesday, bringing further rainfall in northern and northeastern Thailand from Thursday and into the weekend.

According to media reports, the Pa Sak Jolasid dam was last recorded at 136 percent of its capacity, while the Bhumidol dam was at 93 percent capacity, the Sirikit dam at 99 percent, and the Kwae Noi dam at 94 percent.

Lampang airport, meanwhile, was completely shut down due to the heavy rain and flooding and is expected to remain closed until later today.

Furthermore, the historical 500-year-old Phet Fortress (Pom Phet) was also inundated by the rising waters, despite the efforts of around 100 Fine Arts Department staff placing sand bags around the fortress up to two meters (6.5 feet) high. Staff have continued to drain the site and continue to place sandbags around it.

So far, Phuket has not suffered major flooding over the past month, but yesterday saw a man hospitalized from a landslide. Phuket has suffered a number of landslides this year, often attributed to deforestation and/or poor construction management in the hills.

Yingluck to visit Burma tomorrow
The Nation / Phuket Gazette
Prime Minister Yingluck Shinawatra will make a one-day official visit to Burma tomorrow, during which she is expected to discuss anti-narcotics smuggling efforts and illegal immigrant workers, among other issues.

Yingluck said yesterday that during the visit she would have a discussion with Burmese leaders about boosting bilateral ties, particularly involving trade and investment. The opening of more permanent border crossing points would also be discussed, she said.

At Government House, she took part in recording a special television programme chronicling the Burma visit.

The Burmese president is to host a dinner for the Thai leader in the evening. Yingluck and her entourage are scheduled to return to Bangkok shortly before midnight.

Thailand’s 31-year-old Kaew Pongprayoon overcame a height disadvantage by bustling up inside the German’s reach to land shots from close range. Pinning Hamza Touba to the ropes towards the end of the first round, he blitzed him with a combination to snatch a 3-2 lead.

In the second round, the German suffered an eight count after the Thai’s straight right broke through his guard. Scenting victory, Kaew upped his tempo and had Touba wobbling again with a right hook that stretched his lead to 8-4.

Staring defeat in the face, the German went all out from the start of the final round, but Kaew drew on his experience, reverting to hit-and-step-away tactics to secure an impressive 14-8 victory.

Kaew is now only one bout away from booking a ticket to the London Olympics next year. To achieve that, the Thai needs to defy the odds against Azerbaijan’s Salman Alizada, currently ranked world No 1 in the 49kg division.

“Today I faced the tallest opponent in my division, so our game plan was to stay close with him.

“Thanks to my first round bye, I was out of the ring for eight days leading up to this fight. That affected my physical condition – I tired quickly and felt exhausted after the second round.

“There is no doubt that I’m the underdog against the Azerbaijani in the next round. I’ll box carefully and give everything,” said Kaew.