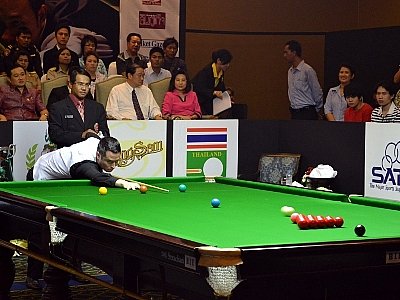 PHUKET SNOOKER: Alfred Burden of the UK began the Sangsom Phuket Snooker Cup in fine style this afternoon with a 4-1 victory over Thailand’s Thanawat Thirapongpaiboon in the opening match.

Burden is ranked 57th in the world, while Thanawat trails in 82nd place.

The six-day tournament is being held at the Royal Paradise Hotel and Spa in Patong.

“Patong Municipality supports sports in every way [it can]. I believe that a high-profile snooker competition such as this is a great opportunity to showcase the sport and its stars,” said Patong Deputy Mayor Chairat Sukhaban, who chaired the opening ceremony.

“I also wish to invite the players to enjoy their free time at Patong Beach,” he added.

The Phuket Gazette sponsors the Sangsom Phuket Snooker Cup and will give regular updates on results throughout the tournament.