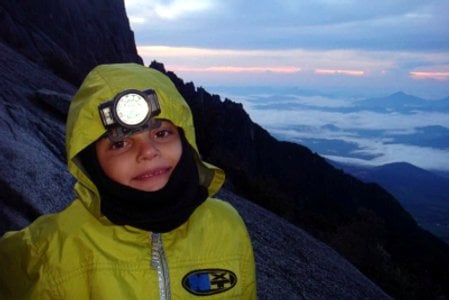 PHUKET: In a bid to raise money for charity, two Phuket sisters made it 3,560 meters up Borneo’s Mount Kinabalu in the early hours of Thursday morning.

Kasia Sambrook, 9, and her sister Alicia, 6, were the only children in a group of 174 climbers attempting the two-day climb to the 4,095-meter summit, the fourth highest peak in the Malay Archipelago.

The girls, who have lived on Phuket for five years with their father Frank and mother Ania, were climbing to raise money for Phuket’s Soi Dog Foundation.

Out of the group, some 40 climbers gave up on the first day, but Kasia and Alicia were undeterred.

They endured three almost vertical rope ascents in the dark with only headlamps to provide visibility, as exhaustion and diminishing oxygen took their toll.

The girls’ father Frank Sambrook, who kept a close watch on the youngsters throughout, told the Gazette that the girls made it “within touching distance” of the summit.

“As the girls made their way up, they kept meeting people coming back down who had given up at the sight of the first rope ascent,” Mr Sambrook said.

“With 535-meters left to go, the girls’ guides told them the rope ascents were becoming too difficult,” he said.

“Some climbers on the trip did not even attempt the rope ascents and the guides had to deal with returning climbers who burst into tears on the mountain,” Mr Sambrook added.

As the girls made the tricky descent back down the mountain, their father said Alicia ran down the final steps, with Kasia following close behind.

“At various times over the two days when one of them started to tire, the other would keep them going by shouting ‘Think of the puppies’!”

“We hope the publicity can raise some more funds for the brilliant charity [Soi Dog Foundation].”

“We are very, very proud of our girls and what they have achieved,” Mr Sambrook added.

If you would like to contribute please make a donation at: www.soidog.org referencing the Mt Kinabalu climb, or email: homeschoolphuket@yahoo.co.uk