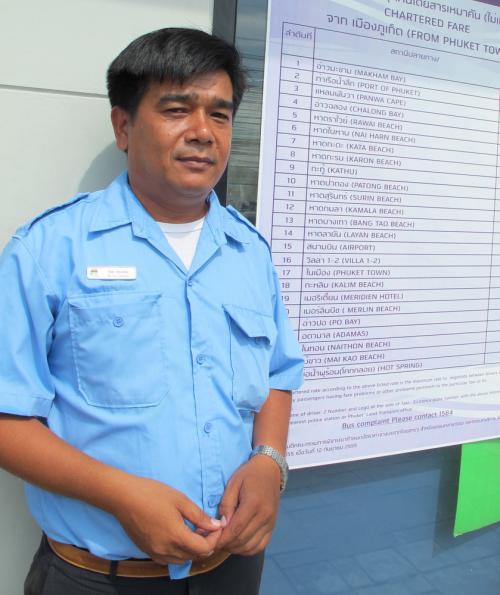 PHUKET: Pom Sukkasem, the leader of the Central Festival taxi group arrested in September on extortion charges, has announced that the charges have been dropped. However, the Department of Special Investigations (DSI) begs to differ.

“I reported to the Criminal Court in Bangkok on Monday as required, and I was told that the prosecutor decided not to pursue my case,” Mr Pom told the Phuket Gazette.

“I don’t know any other details, but either way I am innocent,” he said.

Mr Pom and his brother Sern Sukkasam were both charged with three counts of extortion against taxi drivers in the taxi group of which Mr Pom was head. Both men denied the charges and were released on bail (story here).

The brothers’ arrests were part of a concerted effort by multiple government bodies to clean up “taxi mafia” in Phuket. Though the DSI published a list of “taxi mafia” figures, neither brother was named on the list (story here).

Despite Mr Pom’s announcement, Somboon Sarasitt of the DSI told the Gazette this morning that the case against Mr Pom and Mr Serm was not over yet.

“It is not true that the Public Prosecutor has decided not to pursue the case,” Lt Col Somboon said.

“The Prosecutor ordered investigators to get more evidence to support the extortion charge. That does not mean the case has been dropped,” he affirmed.

“They have yet to make a decision about that whether or not to pursue it,” he said.

“The DSI is continuing to work on reducing the power of whoever is behind illegal taxis in Phuket,” he added.

“On November 6, our management board will discuss the rules of our co-operative. Then we will present these to our members. If most of them agree with the rules, we will proceed to the Phuket Provincial Co-operatives Office to register formally as a co-operative,” he explained.

“I think we can finalize everything by the end of November,” he added.