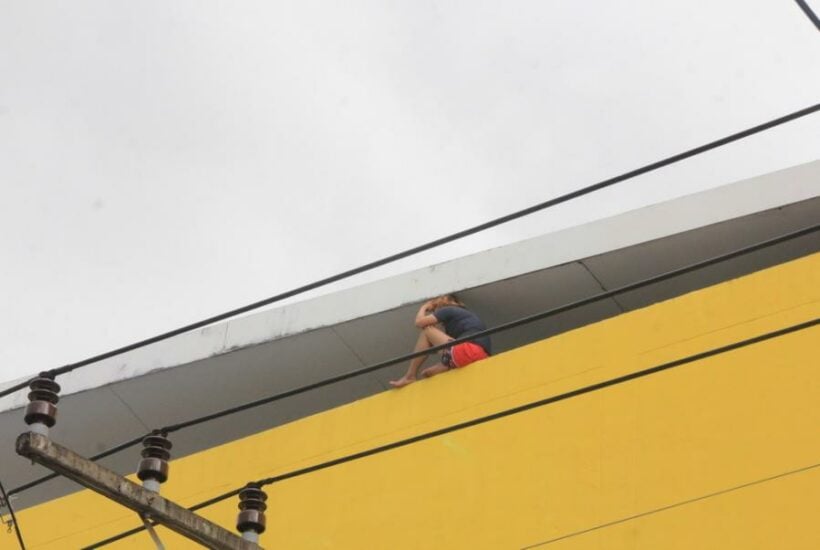 PHUKET: An agitated woman with relationship troubles was injured this morning after she jumped off the third floor of a building in Phuket Town.

This is the second case of its kind within two days – the first incident took place early morning yesterday when another girl nearly drowned in the sea at Saphan Hin (story here).

“Today’s incident took place at Sarita Mansion in the Poonpon area at about 11am. The 21-year-old woman was sitting at the edge of the roof of the apartment building. Rescue workers tried to persuade her not to jump, while other team members rushed to set up an air mattress and arranged for a cable car to get up there,” Phuket City Police Superintendent Komol Osiri told Phuket Gazette reporters.

The woman reportedly refused to listen to anyone and lowered herself to hang off the edge instead.

“She held on for about three minutes and then let go, hitting her head on an aircon unit and falling to the ground unconscious. She was taken to Vachira Phuket Hospital,” he added.

Sarita Mansion staff told police that she had been living at the apartment for about one month and had had an argument with her girlfriend at about 3am this morning. Her girlfriend had then left for work.

“She wrote a letter before going up to the roof. The letter stated that she was done with the relationship. However, we will question her girlfriend first before closing the case,” said the superintendent.

Drug mule arrested in Phuket with 800,000 baht’s worth of pills