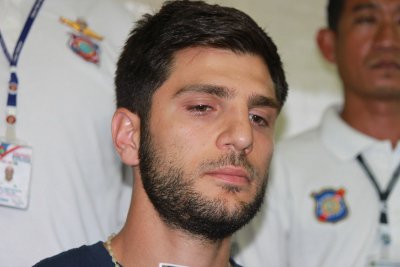 The news was announced at a press conference led by Assistant National Police Chief Charamporn Suramanee at the Royal Thai Police Institute of Forensic Medicine in Bangkok, where the bodies of the four victims, found in the aftermath of the blaze, were taken for identification.

“Forensics officers identified the cause of death as suffocation,” Lt Gen Charamporn said.

“The family have accepted the investigators’ findings,” he added.

Joseph Tzouvanni, the victim’s brother, arrived at the institute with representatives from the British embassy, this afternoon, to claim the body.

However, the family have decided to leave Mr Tzouvanni’s remains at the institute until arrangements are made through an insurance company, Lt Gen Charamporn said.

Joseph arrived in Phuket on Sunday, flying directly from London, after hearing news of the fire. He made an emotional plea to the public for any information that might prove his brother Michael was alive.

Efforts to identify the remaining three bodies are progressing slowly.

“We have received DNA samples from the Thai families who believe they have lost loved ones to the fire. The results from the DNA tests should be available within one to two days.

“In our efforts to confirm whether or not the fourth body is that of the Frenchman believed to have died in the fire, we have yet to receive DNA samples from the family involved,” Lt Gen Charamporn explained.