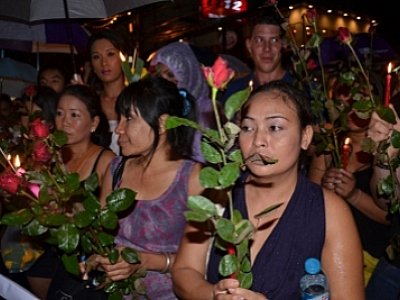 PHUKET: Over 100 people holding red roses and candles gathered, in the rain, in front of the fire-gutted Tiger Discotheque at 2:30am today to mourn those who died in the inferno last week.

Officials, business owners, locals and tourists gathered in a minute of silence on the usually chaotic Soi Bangla before laying flowers in front of the charred building in memory of those killed and injured.

“No one wanted the fire to happen,” Lt Col Akanit told the mournful crowd.

Despite the somber atmosphere on the usually vibrant street, many in the crowd showed their support for Tiger Discotheque’s possible return to operations.

Note: The number of attendees was revised down to “over 100” from “nearly a thousand” based on subsequent eyewitness accounts of the event. This revision was made by the Phuket Gazette news editor shortly after the release of the initial report.