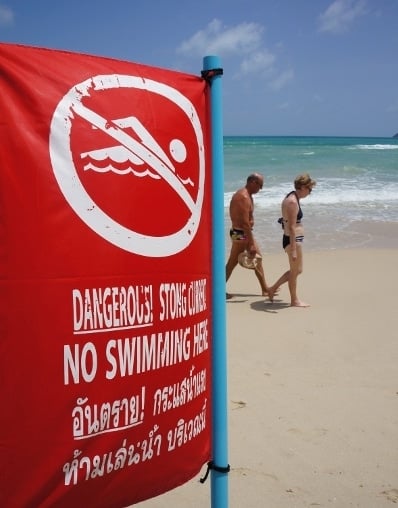 PHUKET: An English tourist who ignored warnings not to swim in dangerous surf at Patong Beach yesterday became the latest monsoon-season drowning victim in Phuket.

Patong Police received a report of the incident at 8:15am.

Among the officers who rushed to the scene were Patong Police Superintendent Jirapat Phochanaphan and his deputy Kittipong Klaikaew.

Pol Sub Lt Thawatchai Srimai told the Gazette that by the time he and his superiors arrived at the scene, offshore from the Kalim three-way junction at the north end of Patong Beach, it was too late; lifeguards had already pulled the victim’s lifeless body from the water.

He was later identified as UK citizen Peter Cook, age 47.

Sakhon Chaithong, chief lifeguard at Patong Beach, told the Gazette that there was no lifeguard on the beach at the time the incident occurred.

“When the lifeguard arrived on duty at 9am, a beach vendor at the scene explained to him that he tried to warn [Mr Cook] to not go swimming in the rough sea,” said Mr Sakhon.

The beach vendor said Mr Cook arrived at the beach at about 7am to go swimming with his daughter. However, Mr Cook reportedly entered the surf regardless of the warning.

“The beach vendor said he used a stick to help pull the daughter back to the beach, but could not help the man,” Mr Sakhon explained.

An initial examination gave the cause of death as “respiratory impairment from immersion in water”.

Phuket Kusoldharm Foundation workers transported the body to Patong Hospital, where doctors will examine the body to try and confirm the exact cause of death.

It was the third drowning death at Patong Beach since the onset of the monsoon season in May.

Repeated calls by the Phuket Gazette for tourism-related agencies to work with airlines to inform inbound passengers of the dangers of swimming during monsoon season have thus far gone unheeded.

To view the results of a recent poll on how to best warn visiting tourists of the dangers click here.