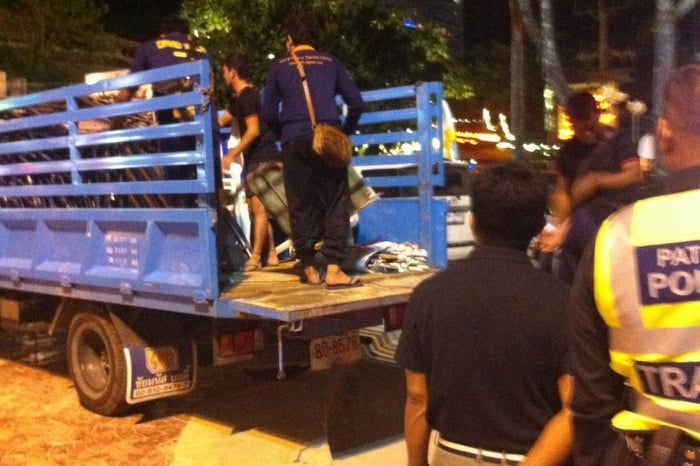 PHUKET: Confusion reigned at Patong Police Station this morning when a group of tourists arrived to reclaim their beach chairs and umbrellas, which were mistakenly confiscated by officers trying to ensure that vendors were not encroaching outside the recently established special beach zones.

About 15 tourists arrived at the station, Lt Col Sutthichai Tianpho of the Patong Police confirmed.

“Police seized the umbrellas and beach chairs because they thought they belonged to beach vendors,” he explained to the Phuket Gazette.

“The officers seized the umbrellas, beach chairs and boxes left on the sand, as vendors are not allowed to leave their belongings on the beach overnight,” Col Akanit said.

“Many of the items were grouped together, and some of the chairs were even chained up, showing that they belonged to someone other than a tourist.”

The foreigners who arrived at the police station this morning said that they had bought their own beach equipment and had paid vendors 20 baht each to look after their belongings overnight, Col Akanit explained.

“But when they returned this morning, their belongings were gone, so they came to the police station to ask what had happened to them,” he said.

Col Sutthichai noted that the items identified by the tourists as theirs were returned.

“No tourists were fined, but we are keeping a close eye on beach umbrellas – any suspicious umbrellas will be seized,” he said.

“Come and see for yourself. Local people are not following the rules,” he said. “They never seem to have enough, that’s why this problem can never be solved.”

“The beach has become very messy. The 10 per cent umbrella zone doesn’t work well because tourists are allowed to bring their own umbrellas and set them outside the special areas,” she told the Gazette.

“Now, you can see umbrellas everywhere. Tourists can rent or buy their own umbrellas from anywhere, not only from us, which means that there is an almost unlimited number of umbrellas now allowed on the beach.”

“I will explain to the governor what is really happening on the beach under the new policy,” she said. “The sooner we find a good solution to this, the better for all of us.

“Personally, I would like to see the dedicated umbrella zone strictly enforced, so we can control the situation and keep the vendors in order.”

Meanwhile, five vendors who were caught leaving their rental items on the beach last night were fined 1,000 each, Col Akanit confirmed.

“Some of the items are still at the police station waiting to be reclaimed by the vendors,” he said.