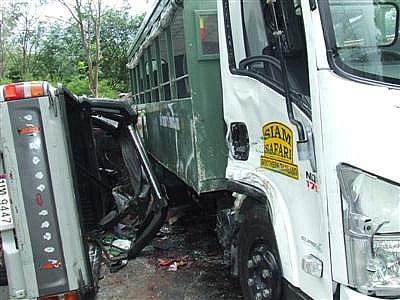 PHUKET: An official report issued by the Department of Disaster Prevention and Mitigation office in Phuket (DDPM-Phuket) stated that the cause of yesterday’s crash that killed six people in the Chalong hills was brake failure and overloading.

A total of 14 people were injured, seven severely.

The crash raised the death toll to seven during the “Seven Days of Danger” road safety campaign that ran from April 11 through yesterday.

The DDPM-Phuket had been instructed to try to keep the number of deaths to two or fewer during the campaign. The province was on target until yesterday’s tragedy.

In a related development, Siam Safari, the tour company whose passenger truck was involved in the accident, has issued an official statement about the the crash.

“On the 17th of April, 2011 at about 11:30am, a traffic accident occurred when Siam Safari guests were on their way to the Siam Safari Elephant Camp at Nakkerd Mountain in Chalong, Phuket.”

“According to eye witnesses, a pickup truck with more than 10 passengers had gotten out of control and was coming down the road uncontrollably. On a corner where the road is very steep the pick up truck crashed into the side of the Siam Safari truck that was taking 15 guests up to the elephant camp. The Siam Safari truck is registered for 18 passengers.”

“Three of Siam Safari’s guests, Australian nationals, suffered minor cuts from broken glass that most likely came from the windshield of the pickup truck. The injured guests were taken to Phuket’s Bangkok International Hospital to be checked.”

“All Siam Safari guests are fully insured in case of such accidents and our insurance policies will cover all expenses.”

“We would like to offer our heartfelt condolences to the families involved in the accident.”

“Any questions or queries regarding the incident should be directed to Siam Safari Tours Nature Company Limited.”