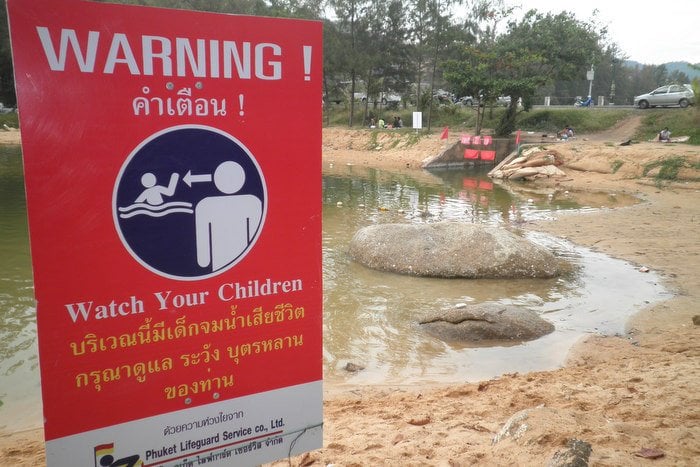 PHUKET: A 9-year-old boy was pronounced dead this morning, after being recovered from the bottom of Nai Harn Lake yesterday afternoon.

After 20 minutes of searching, off-duty lifeguards pulled Sarun Srisongkram from the water at about 5pm last night. He was not breathing, and was immediately given cardiopulmonary resuscitation (CPR) by lifeguards who happened to be training on the beach at the time.

“We were training for the international life-saving skills competition in Vietnam in April [story here],” former Nai Harn chief lifeguard Jula Nontree told the Phuket Gazette. “Our staff searched the lake for him, and eventually found him pinned to the outflow grate between the lake and the lagoon.”

“Doctors did their best, but had to pronounce him dead this morning,” said Rawai Mayor Aroon Solos.

The island’s beaches have been unguarded since Wednesday, as lifeguards left their posts following their annual contract expiry date on March 26 (story here). Mr Jula confirmed that he did not know when lifeguards would return to the beaches.

The popular swimming lagoon, on the other side of the grate Non Sarun was found pinned to, has claimed the lives of several children over the past few years.

As recently as April last year, a toddler who went missing from his home in the area was later found dead in the lagoon (story here).

Four months earlier, a girl was pulled unconscious from the bottom of the lagoon and rushed in critical condition to hospital. She was later pronounced dead in hospital (story here).

Another victim was Methee Khunsuinhu, a 7-year-old boy who was pulled unconscious from the lagoon on New Year’s Day in 2012 (story here).

A few days later, quick action by a foreign tourist saved a toddler from a similar fate (story here).

A month after that, 6-year-old Supathanwa Choophuek was reportedly alive when pulled from the lagoon, but later died at Vachira Phuket Hospital (story here).

Mr Aroon told the Gazette that he would hold a meeting with relevant authorities this afternoon to discuss what needs to be done to prevent future drownings.

“We will meet today to finalize plans of hiring staffers to guard the lagoon during school breaks, as many people will bring their children to swim during this time,” he said.

“We have installed signs urging parents to watch their children, and we might install more. We want to have at least one professional watching over swimmers as well.”

However, Mr Aroon confirmed that he would not consider closing the lake or lagoon to swimmers.

“These accidents are not caused by the water. Children must be supervised at all times, and should never be left alone,” he said.

“We again urge parents to take responsibility of their children and try to prevent future accidents. They are only children, and will naturally want to play in the water. It is up to parents to make sure they are safe.”