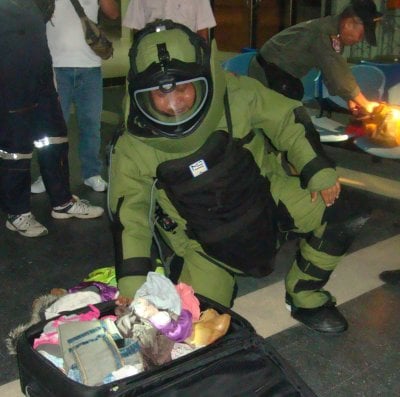 PHUKET: Phuket City Police responding to a report of an unattended suitcase at the new Phuket bus terminal last night considered the threat serious enough to call in the bomb squad.

Phuket City Police Deputy Superintendent Jamroon Plaiduang, and bomb-disposal officers from both Phuket and Thung Song District in Nakhon Sri Thammarat, arrived at the scene at about 9pm.

Mr Sumpas told police that he observed a woman placing the suitcase at the scene at 8pm and later leaving the terminal on a motorcycle.

After waiting for an hour for her to return, he decided to reported the unattended bag to the village headman and police.

“The police were afraid that the suitcase might contain a bomb or other weapons. Luckily we found only lady’s clothes and shoes. We’ll take it to the station and return it to the owner when she contacts us,” said Col Jamroon.