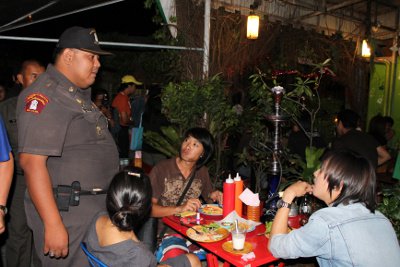 PHUKET: A series of raids netting underage youths working at entertainment venues in Phuket Town has prompted Phuket authorities to ramp up their child protection campaign.

Members of the various organizations involved in children protection met to discuss recent events and related what measures are being taken to curb the rising trend of youth drug-addiction and wayward behavior.

The meeting was to file a report on the current situation in Phuket with the Child Protection Agency’s Coordination and Monitoring Implementation Committee in Bangkok.

“We have been working with the Office of Social Development and Human Security (SDHS-Phuket) and the Phuket Shelter for Children and Families to investigate places where young people assemble for unlawful purposes,” said Kriangkrai Boonta, deputy chief of the Education Ministry’s Semarak Center in Phuket.

The Semarak Center is responsible for monitoring students’ behavior and cooperating with other institutions to solve youth-related problems.

“After receiving complaints, we examined two bars in Wichit on February 11. At one of them, the Rong Tiam Bar, we found 18 young people; 12 boys and six girls,” Mr Kriangkrai continued.

“Six were arrested for drug possession. Even though the others weren’t charged with any offense, we recorded their names and gave them a stern warning,” he said.

A search of the bar recovered bladed weapons and “baraku” (hookah water pipes) made from modified whiskey bottles. Officers also suspect that the venue may have been used by youngsters as a secluded spot for sexual activities as they found used condoms on the second floor of the building.

The bar was shut down and the bar owner now faces charges under the Child Protection Act, B.E. 2546 (2003). The Act allows the prosecution of individuals who force, encourage or allow a child to adopt behavior and manners which are inappropriate or likely to be the cause of wrongdoing.

On May 2, officials raided the Andaman Bar in Phuket Town. They found 11 boys and six girls in the bar, nine of whom tested positive for drugs. All had warning letters sent to their parents telling them to control their children.

Highlighting a third case study, Mr Kriangkrai said that during an investigation at Saphan Hin on May 12, his team found a group with eight girls under 18 years old.

At the time the group was attempting to make one girl vomit. After questioning it was ascertained that the girl had consumed a drug-cocktail of cough syrup containing 40 pills, a mix of an antibiotic and Alprazolam prescription pills.

“She was rushed Vachira Phuket Hospital. The others had their names recorded and their parents were warned to watch their children more closely,” he said.

Drugs were not the only issue discussed at the meeting. Sanyalak Yoorak of the SDHS-Phuket explained that during an inspection of Patong, Kata and Karon areas on January 26, officers found a 7-year-old girl selling flowers. The girl had bruises on her body and under her right eye. Questioning revealed that she had been coerced to sell flowers.

“We sent her to the Pattani Home for Girls Welfare because no one came to pick her up,” Mr Sanyalak said. “Patong Police want to question the mother as to how the bruising occurred. If it transpires that she has mistreated or hit the child, legal action will follow.”

Citing another case in Patong, Mr Sanyalak recounted an incident on April 30 involving three Cambodian girls, aged 7, 9 and 10, who were caught selling flowers. A woman arrived to collect the children. However, officials were suspicious of her and on questioning the woman they discovered that she was unrelated to the children and had only been hired to collect them.

That lady is now subject to the legal process and the girls are being looked after by the Southeastern Provinces and Occupational Development Center at Baan Sri Surat while the authorities try to locate their real parents.