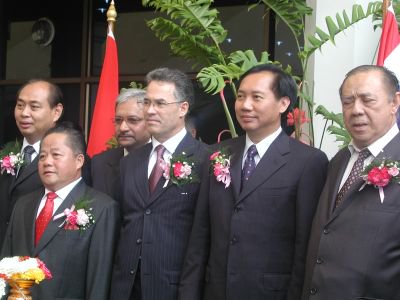 PHUKET CITY: Phuket’s bars and entertainment venues may be allowed to open later again, if their owners can convince the authorities that they are seriously taking action against under-age patrons, drugs and drunk-driving.

Bhokin Balakula, Interior Minister, told the Gazette today that the entertainment laws must be enforced. But, he added, “There is a possibility the rules might be re-considered, if we find an improvement in customers’ awareness of how to behave in such places, and safer driving.”

He continued, “The entertainment venues were the worst places [for contravention of these laws]. That’s why the order was introduced.”

The Phuket Entertainment Business Association had lobbied the minister for early-closing rules to be eased because, it argued, many of its members cater to tourists who don’t venture out to play until midnight or 1 am – precisely the time when, the new order says, most venues must close.

K. Bhokin said, “We do understand that Phuket is a place for tourism. Tourists expect to have fun here, and that is fine, so long as there are no drugs, no excessive drunkeness and no under-age patrons involved.

“I have told [Phuket Governor Udomsak Usawarangkura] to consider what he thinks would be the best thing to do about the early-closing order.

“All rules can be reviewed if the problems [regarding the venues] are under control.”

K. Bhokin said it made no difference whether a city was a tourist destination or not. The point was that venues must be free of under-age drinking and drug-taking, and the patrons must not drive drunk.

He continued, “It is also important that the business operators are strict. All those involved in this must prove that they can control all these things, then I think it’s okay. We should work together.”

The minister was in Phuket for the official opening of the new Consulate of the Kingdom of Morocco, which is in ST Plaza in Phuket City.

K. Bhokin told 200 or so guests at the nearby ST Hotel, including the new Honorary Consul, Valentino Tan, “It’s very good for both our nations that we have a Moroccan Consulate in Phuket, especially as we have a sister city – Casablanca – in Morocco.

“Thailand gets many Arab tourists during the low season; they like the green scenery at this time of year. It’s good for Thailand’s tourism.”

Mr Tan said that the new consulate will “open doors” for people in Phuket and Morocco and bring about a greater flow of trade and investment.