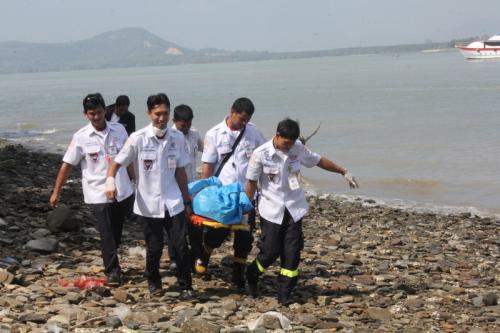 PHUKET: Police are trying to determine the identity of a man whose body was found this morning washed ashore at Laem Tukkae, on the east side of Phuket Town.

The man was likely a Burmese crewman aboard one of the many vessels operating out of Phuket, said Phuket City Police Duty Officer Chaleaw Taihoo.

“He may have had an argument with other crewmen, who possibly stabbed him to death and then dumped his body overboard,” he added.

A sea gypsy collecting recyclables from trash swept ashore discovered the body face down on the sand at about 8:30am.

“The man had dark skin and was about 168-170cm tall. He was dressed only in shorts and had a piece of cloth wrapped around his head. We believe he died about three days ago,” Lt Col Chaleaw said.

The body had one deep cut in the back, one to the throat, one to the head, four on the left shoulder and one in the left underarm area.

Police had the body taken to Vachira Phuket Hospital to formally determine the cause of death.

“We asked villagers in the area, but no one knows who the man was,” Col Chaleaw said.

“We will conduct further investigation into his death,” he added.