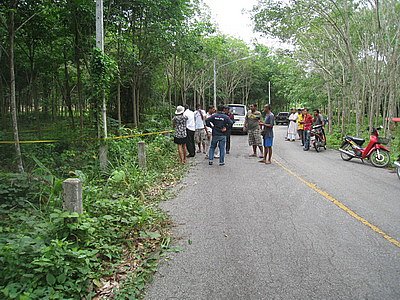 PHUKET: The body of a teenage boy who went missing over a week ago was discovered by the side of the road in a Phuket rubber plantation yesterday morning.

Villagers found the badly decomposing body of an unidentified male a few meters off the access road to Namuang Village, a rubber planting community off Thepkrasattri Road, about eight kilometers south of the Airport Road turnoff.

The body was later identified as that of Thawatchai Maelanon, a 15-year-old who went missing from his home in Nai Yang on March 19, Capt Pratheung said.

Police suspect the boy was lured to the remote area and slain by “enemies”.

The advanced state of decomposition made it impossible to determine the exact cause of death by initial examination, however.

Kusoldharm Foundation workers took Mr Thawatchai’s remains to Thalang Hospital, where they will be examined and then stored until claimed by relatives.