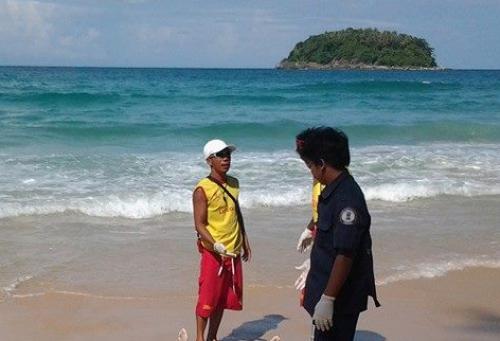 PHUKET: The body of a Chinese tourist who disappeared while swimming at Karon Beach on Monday was found washed ashore at Kata Beach, about three kilometers away, yesterday afternoon.

“We have now found the body of Sheng Caoliang, who was 31 years old and reported as missing on Sunday,” Karon Police officer Lt Sathaporn Seenoon said.

“Mr Sheng and a friend went for a swim at Karon Beach. But while they were swimming, lifeguards warned them to get back on the beach because of the sea conditions at the time. Regrettably, they did not obey them.

“The beach guard went to help them when they got into difficulties, but were only able to rescue Mr Sheng’s friend,” Lt Sathaporn said.

“The biggest cause of drownings in Phuket is tourists’ failure to obey the warnings of lifeguards or red flags,” Lt Sathaporn noted.

On roadside north of Phuket, stomachache turns into baby boy