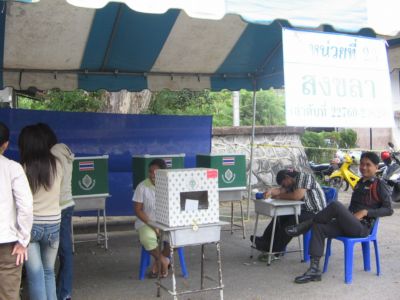 PHUKET: Advance voting held in Phuket on Saturday and Sunday for the March 2 senatorial election saw much less interest among out-of-town Thais than before the parliamentary election held last December.

This was in sharp contrast to the weekend of December 15 and 16, when 25,956 voters (more than 85%) made their way to Phuket Community Hall on to cast absentee ballots for the December 23 general election.

K. Supap attributed the low turnout to the fact that canvassing activities of Senate candidates and their supporters are highly restricted compared with those for candidates running for parliamentary seats. Similarly, low turnouts were common across the country, he said.

There were no reports of any violations of voting rules during the advance voting, he said.

“I hope at least 60% of registered voters will turn out to vote next Sunday,” he added.

There were also 4,186 Phuket residents who cast advance ballots over the weekend: 1,918 on Saturday and 2,268 on Sunday. Most were people who will be unavailable to vote next Sunday.

The advance polling for Phuket residents was held at three polling stations, one in each district: Kathu Army Petrol Depot in Kathu, Thalang Pranangsang School in Thalang, and Phuket Municipality Meeting Hall in Phuket City.