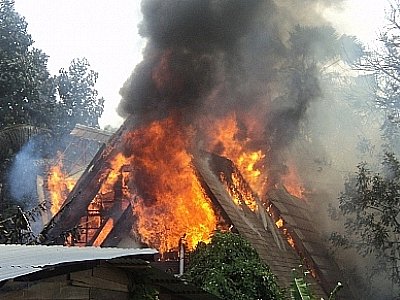 PHUKET: Damage caused by a fire that engulfed a wooden house in Phuket today is expected to be in the millions of baht.

No deaths or injuries were reported to have occurred at the scene, in Chalong next to HomePro Village on Chao Fa West Road.

The fire began just before noon and raged for more than an hour, consuming much of the house before firefighters were finally able to bring it under control.

Phuket Tourist Police volunteer Garry Halpin, who is based at the new center at Chalong Circle, was one of the first to arrive at the scene.

He was joined soon thereafter by Snr Sgt Maj Surasit Sukkrai of the Chalong Traffic Police.

Both men were crucial in the initial emergency efforts as firetrucks, rescue workers and other authorities arrived at the scene.

More than 20 Disaster Prevention and Mitigation officers responded from the Rawai, Kata-Karon and Chalong Municipalities.

“It’s hard to put into words how much help he [Sgt Maj Surasit] provided in organizing everyone and moving all cars, motorcycles and flammable materials away from the fire, and then later helping to fight the fire,” Mr Halpin said.

The flames grew and spread rapidly, fueled by the wood construction of the house and strong winds, he added.

Mr Halpin explained that despite the damage, a lot more would have been lost if it hadn’t been for the efforts of the officers at the scene.

The owner of the residence, Winai Pongbupasirikul, also owns Winai Construction, a wood furniture factory behind the house, which was not damaged in the blaze.

Chalong Police said an investigation will be launched to determine the cause of the fire.

PGTv footage is available for this article.

Drug task force to be posted at Phuket Airport

More haze may be heading for Phuket