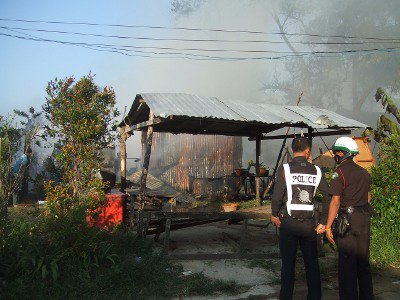 Officials at Cherng Talay Tambon Administration Organization (OrBorTor) rushed two fire trucks to the scene on Soi Bang Tao 12, near the southern end of Phuket’s popular Bang Tao Beach, after being informed of the fire at 4:30pm.

Although assisted by local villagers, Cherng Talay Police and Kusoldham Rescue Foundation workers, the firefighters struggled to contain the blaze, which quickly engulfed seven homes made from wood and tin.

Concerned the blaze would spread further and destroy more homes, the firefighters called for assistance, prompting two more fire trucks and accompanying firefighters to be dispatched from Cherng Talay Municipality.

It took more than one hour for the firefighters to extinguish the blaze.

Local villagers told police that before the fire started, they heard an explosion from somewhere within the huts. Flames then quickly engulfed the homes.

Police officers at the scene told the Phuket Gazette that an electrical short circuit or a faulty electrical appliance may have caused the blaze.