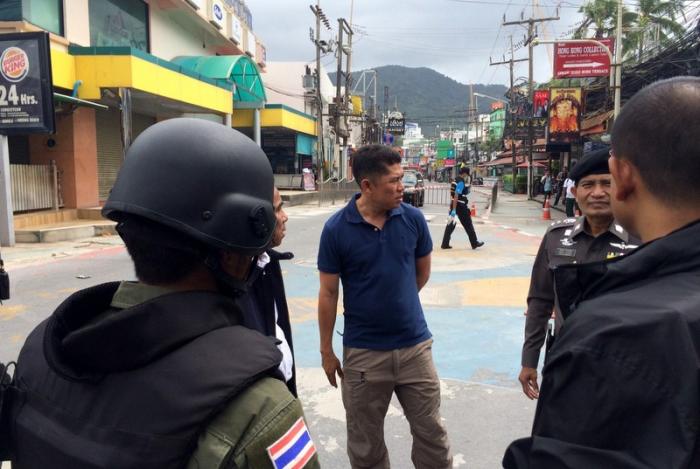 The blasts began yesterday in Trang, where an explosion killed one and injured seven others while vendors were setting up stalls in a downtown walking market.

Last night, a deadly dual bombing hit an upscale resort in Hua Hin, leaving one dead and 21 wounded. Investigators believe the bombs were hidden in plant pots nearly 200 feet apart and were detonated within a half hour of each other.

This morning, a blast outside the Marine Police headquarters in Surat Thani left one dead and injured three others. Thirty minutes later, another blast hit the district police station. No one was harmed in the second attack.

Around the same time, a blast occurred at a police box on Bangla Road in Patong, leaving one person injured. Followed by a blast at Loma Park off Patong Beach, where crowds had gathered earlier this morning to celebrate Mother’s Day and the birthday of Her Majesty the Queen.

Police then reportedly destroyed a suspicious device near Patong Beach. Initial reports point to the object being located near the Baanthai Resort & Spa. An area of at least 200 meters around the hotel was cordoned off.

At 9am, two more explosions reportedly occurred at a clock tower in central Hua Hin. There are no reports of injuries in this morning’s Hua Hin blast.

The Phuket Gazette received reports of two more blasts in Phang Nga shortly after 10am this morning. No one was reported killed or injured in those explosions.

A spokesperson for the Airports Authority of Thailand (AoT) said security has been bolstered at Phuket International Airport.

Prime Minister Prayut Chan-o-cha this morning ordered security to be stepped up in municipal areas, tourist destinations and landmarks.

“The PM has issued emergency orders to the relevant agencies in these areas, in order to prevent another bombing and to increase security in crowded areas,” Government Spokesman Maj-General Sansern Kaewkamnerd said this morning.

The general said it was still too early to identify who was behind the attacks, but said he guaranteed that authorities will bring those responsible to justice. He asked the public to remain vigilant and to report anything suspicious to local police.

Gen Sansern also stated that the PM has ordered the Ministry of Foreign Affairs to take care of the tourists affected by the attacks in Hua Hin last night.