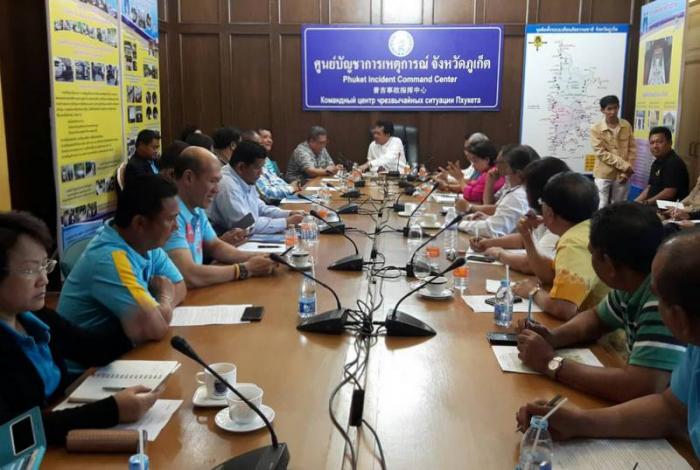 PHUKET: In a statement issued this morning, Phuket Governor Chamroen Tipayapongtada said has ordered additional security personnel to be deployed across the island, in the wake of two blasts in Patong this morning.

The governor’s comments come after a meeting with military and police advisers at Phuket Provincial Hall. The province was put on ‘high alert’ yesterday, after a bomb blast at a market in downtown Trang killed one person and wounded seven others (story here).

“I have ordered an increase of personnel to be deployed at checkpoints, bus stations, markets, tourist attractions, government offices and Phuket International Airport,” Gov Chamroen said. “I’ve also asked that government offices be guarded for the next 24 hours, and for local officers to ensure that public places are well-lit and that CCTV systems are working properly.”

Highway Police set up an additional checkpoint on the northbound lane of Thepkrasattri Road before the airport, near their kiosk, this morning. That checkpoint backed up traffic for several kilometers to the south, before being dismantled this afternoon.

Travelers headed to the airport should allow additional time for security checks and traffic jams. Nearly half of all flights through Phuket International airport have been delayed.

Governor Chamroen’s comments echo those of Deputy Prime Minister Prawit Wongsuwan, who said that local security forces nationwide have stepped up measures in response to the unprecedented spate of explosions that rattled the Kingdom yesterday and today.

Mr Prawit’s security adviser, Panitan Wattanayagorn, said it is probable that the bombings were carried out by a network, given the close ranges in detonation timings.

He also said that the two inactive firebombs found in Patong yesterday have never been used in attacks carried out by the southern insurgency (story here).

The Embassy of the United States in Bangkok issued a statement of condolences to the victims of the attacks, stating, “We express our deepest sympathy to all those affected by the bombings in Thailand. Our thoughts are with the victims and their families.”

Australia’s Foreign Ministry has issued a travel advisory to its citizens in the Kingdom in response to the bombings.

“Some of these explosions have occurred in locations frequented by tourists, including in Hua Hin, Surat Thani and Patong, Phuket,” the statement reads. “Further explosions in any part of Thailand are possible. There may be an increased security presence and restrictions on local travel movements.

“[Travelers] should avoid the affected areas and other crowded places, monitor local media and follow the instructions of local media,” it said. “We continue to advise Australians to exercise a high degree of caution in Thailand.”