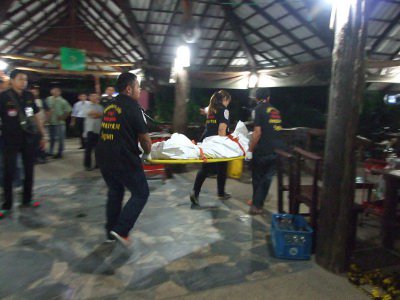 PHUKET: A restaurant owner shot his sister-in-law in the head and then turned the gun on himself in front of shocked patrons at a Phuket City restaurant last night.

Phuket City Police received a report of the shooting at at the Khrua Pailin Restaurant on Surin Road in Phuket Town at about 9:20pm.

At the back of the dining area they found the body of 25-year-old Wassana Jarit, the restaurant’s cashier, slumped over with a pen still in her hand and a single bullet wound to the skull.

On the floor a few meters away was the body of her killer, 53-year-old restaurant owner Bundit Anurakbundit.

Both died of single 9mm gunshot wounds to the head inflicted by the late Mr Bundit.

According to the many patrons that witnessed the shootings, Mr Bundit had since early evening been dining, drinking alcohol and singing with a large group of friends.

The well-known restaurateur had a large circle of friends, which included lawyers, civil servants and members of the local media.

Mr Bandit operated two Khrua Pailin restaurants, the other near his home in Kathu District. Both have reputations for offering wide selections of good food and a friendly atmosphere.

Witnesses said they thought nothing when Mr Bundit got up and went over to the cashier’s table, as he had done so many times before, to get more food and drink for his friends.

But this time he pulled out a pistol, put it to the skull of Ms Wassana, and pulled the trigger. He then paused, then put the gun to his own right temple and fired again, immediately collapsing to the floor.

Witnesses, still in a state of shock when police arrived, described the course of events as surreal.

Investigators, including Phuket City Deputy Inspector Wijak ‘The Magnet’ Tarom, will now try to piece together what caused Mr Bundit to take both his own life and that of Ms Wassana, whose husband was also in the restaurant at the time.