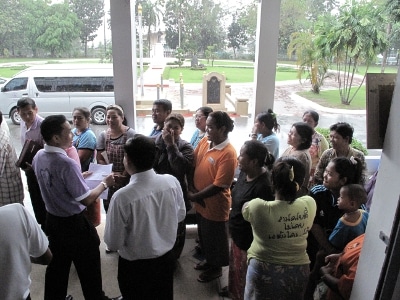 PHUKET: More than a hundred sea gypsies handed a letter of protest to Phuket Vice Governor Nivit Aroonrat on Thursday, demanding action over alleged encroachment at the site of the planned Urak Lawoi Culture Center on Koh Sireh.

The protesters, who live in the nearby Laem Tukkae community, said they were at first unconcerned when they noticed workmen removing barbed wire set up to surround the project site, located off “Soi Tsunami”.

An excavator has been at work filling in part of the land in recent weeks. The sea gypsies initially thought the workman who pulled down the wire were part of the same work team, hired by the government to backfill land at the project site.

When they learned he was not, they demanded an investigation.

Kanin Terdchanakul, an engineer with Phuket Provincial Public Works said the investor presented a title deed proving he owned the plot of land in question.

Land use issues were not clearly examined from the outset, he said.

Land Office surveyors have since visited the site and staked out the boundary between the government land and that claimed by the private investor.

However a length of red string now in place there is just a temporary demarcation. It does not indicate that the land in question has been officially recognized as belonging to the investor, Mr Kanin said.

The Land Office officials are expected to meet with Vice Governor Nivit soon to present their findings.

V/Gov Nivit ordered an investigation into how and when the land title deed for the disputed land was issued.

Until the land issue is resolved, all work on the culture center project will be put on hold, officials said.

US Navy back in Phuket