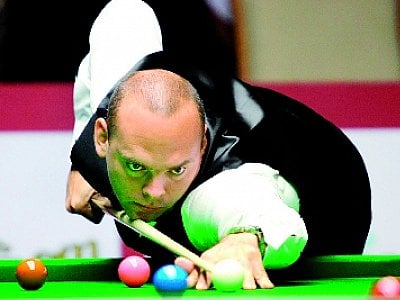 PHUKET: Stuart Bingham struggled against a defiant Passakorn Suwannawat in the last quarter-final of the Sangsom Phuket Snooker Cup (updated table of results here) being held at the Royal Paradise Hotel in Patong.

The best of seven match started at 7pm with Passakorn looking more at ease than the world number 17.

Passakorn took the first frame, but Bingham recovered to win the next and the frame trading continued in this fashion until the scores stood at 3-3.

Yesterday, Ratchapol Pu-Ob-Orm (James Wattana) and Thepchaiya Un-nooh won their respective qualifiers and face off in the first semi-final at 1pm today.

The final championship match will take place tomorrow at 1pm.

Entrance to the competition is free to spectators.

The Phuket Gazette are sponsors of the Sangsom Phuket Snooker Cup and will update results at regular intervals.