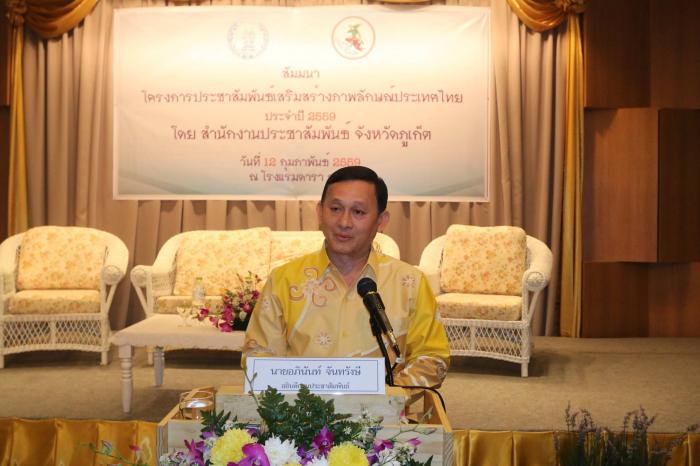 PHUKET: The central government needs to reassess how it determines Phuket’s budget due to the vast number of tourists for which the island’s infrastructure needs to cater, said Phuket Honorary Consul for Nepal Pranee Sakulpipatana at a seminar on the island’s image on Friday.

“The central government calculates the budget for the island based on its registered residential population of about 380,000 people. They fail to factor in the need for the island to take care of more than 12 million tourists, as well as unregistered Thai citizens and expats – all of whom consume resources and put pressure on the infrastructure,” said Ajarn Pranee.

“We need space to breathe; we need more infrastructure development; we need the central government’s help to better develop the image of Phuket,” she said.

Pakpoom Intharasuwan, the provincial chief administrative officer for Phuket, explained that he had been doing his best to secure a larger budget for the island in order to ensure the safety and well-being of tourists and locals.

“We have explained the situation to the central government. This is part of the reason that we have been given such large budgets for the underpasses and flyover projects,” Mr Pakpoom said. “These infrastructure development projects might be an inconvenience now, but they are good for the future of Phuket.”

The on-going infrastructure improvements on the island were also highlighted by Apinan Juntarungsri, the director-general of the Public Relations Department (PRD).

“The airport-expansion project and other development projects show the island is moving in the right direction. These are excellent ways to improve the image of Phuket in the long run,” said Mr Apinan.

“Phuket is already very famous as a tourist destination, and has bolstered the reputation of Thailand. There are countless good aspects about the island: the sun and sand; the smiley, friendly people; and the recent gastronomy award,” he added.

The Phuket Old Town Festival, which was held over the weekend and ends today, is one example of the island’s unique culture (story here).

During the festival, locals and tourists alike are urged to visit the statue of Guan Yin – the Goddess of Mercy – for good fortune, as well as a traditional Hokkien Chinese ceremony held on the last day of the festival at 10pm in Queen Sirikit Park.

Despite the onslaught of cultural events underway this month, Rangsiman Kingkaew, the secretary-general of the Phuket Tourism Association, asked that the provincial Public Relations Department find and present more positive news stories.

“The media can help build a stronger, positive image of Phuket. Good-news stories are important. And it is also important that people think about the validity of a story that might harm the island’s reputation before sharing it on social media sites,” Mr Apinan said.