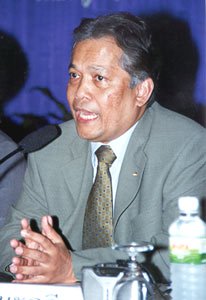 KATA: Worawi Makudi, an executive committee member of soccer’s international ruling body, FIFA, yesterday said that Phuket was still a long way from hosting international-standard soccer matches. K. Worawi, who is also the General Assistant of the Thai Football Association (TFA), said, “The soccer fields here are not up to international standards, and many changes will have to be made before they would be.” K. Worawi made his comments yesterday at a press conference before the start of the annual congress of the Asian Football Confederation (AFC), FIFA’s administrative organization for Asia, which takes place at the Kata Beach Resort this weekend. Speaking about Surakul Stadium, the premier soccer venue on the island, K. Worawi said, “First of all, the ground isn’t smooth. You can feel it’s full of ruts and holes. The grass is another problem; it needs to be green all over the field and shouldn’t be too long or too short,” he said. He added that the problem wasn’t only the soccer pitches, but the standard of the facilities at the stadium too. However, in light of Phuket’s poor development of soccer facilities, K. Worawi said, “If the Governor is interested in upgrading the stadium to international standards, the TFA would be very pleased to help in providing the expertise.” On a different note, K. Worawi announced his support for FIFA president, Sepp Blatter, who is expected to arrive in Phuket tomorrow. “In my opinion, he has been doing a great job and I will support him in the upcoming elections.” He added that, at the moment, no candidates have announced they would run for the position, which carries a four-year term. Mr Blatter was elected President of FIFA in 1998, beating opposing candidate Lennart Johansson from Sweden.

Appeal for info on dead Briton