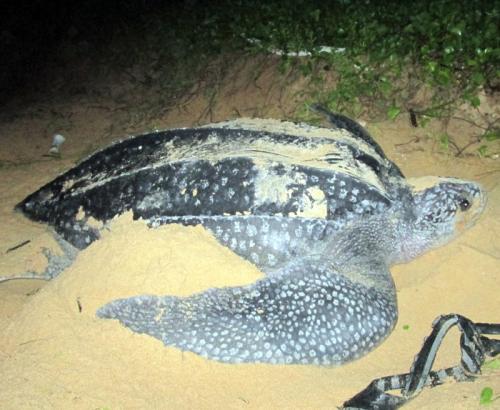 PHUKET: The beach at Khao Lampi – Hat Thai Mueang National Park has been full of life over the past month with 339 baby leatherback turtles hatching from five protected nests in the area.

In the past, enormous leatherback turtles weighing as much as 360 kilograms would lay a total of 400 to 500 nests along the beaches of Phang Nga and Phuket. Now, however, there are less than 10 nests a year, explained Dr Kongkiat Kittiwattanawong, head of the Endangered Species Unit at the Phuket Marine Biological Center.

Of the five species of turtle that live in the Andaman, leatherbacks are the closest to becoming extinct, he added.

“Only about one in 1,000 baby leatherbacks survive to adulthood,” Dr Kongkiat pointed out.

“Previously, we tried rearing leatherback turtles until they were about one year old before we released them into the sea. However, they are more sensitive to environmental conditions than other species of turtles, which made maintaining their health very difficult,” he explained.

The inability to provide adequate care for leatherback turtles during their first year prompted the PMBC to change tack: they now allow the babies to try their luck in the sea.

“We need to develop higher-quality food, because what we gave the turtles to eat previously was causing constipation. We also need a larger pool, as the turtles’ skin is very sensitive and was getting scratched by the side of the pool as they swam, which was leading to skin problems,” Dr Kongkiat said.

“These are just a couple of the reasons why we are now letting them grow up naturally, and are protecting their nesting sites and eggs instead of moving them to our facilities,” he added.

To protect the dwindling population of leatherbacks in the Andaman region, Dr Kongkiat asked people to not remove turtle eggs from nests and not disturb the turtle-nesting areas.

“In the nesting season, from November through March, many turtles come ashore or close to shore. If anybody notices them please, do not disturb them; if you are a fisherman, and one is caught in your net, please free it and return it to the sea,” he said.

Ministry of Justice steps up to help Phuket sea gypsies