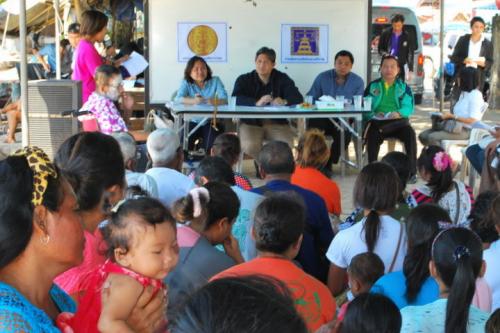 PHUKET: Thailand’s Ministry of Justice is spearheading a multi-agency effort to provide assistance to sea gyspies in Phuket.

Leaders of the small sea gypsy community in Rawai currently face legal action from investors for allegedly encroaching on private land, despite the previously nomadic people having lived there for decades.

Many of the indigenous fisherfolk from Rawai have also been arrested, and released on bail, for fishing illegally in the Similan National Park, many miles north of Phuket.

Pol Col Narat Savetanant, director-general of the Justice Ministry’s Rights and Liberties Protection Department, and a team of officers held a meeting with about 300 villagers on Friday to discus both issues.

“We wanted to talk to the villagers to let them know that we are working with other government departments so we can come up with a reasonable solution,” Col Narat explained to the Phuket Gazette.

As testament to the sincerity of his department’s efforts, Col Narat led a meeting at Phuket Provincial Hall to highlight the sea gypsies’ plight immediately after the discussions with them in Rawai.

At the Provincial Hall meeting were local police as well as officers from the Similan National Park, the Phuket Land Office and the Public Prosecutor’s Office.

“The Ministry of Interior, the Department of Special Investigation and the Royal Thai Police are cooperating to find a way to fight the claims, and to find a lawyer to represent the sea gypsies,” Col Narat told the meeting.

The Rights and Liberties Protection Department has spent around 100,000 baht on posting bail for the sea gypsies arrested for fishing in the Similan National Park and is now contacting the relevant departments involved in the court cases, he added.

“Our officers will be reviewing maps, historical photos and conducting interviews to prove that the Rawai sea gypsies have been living there for generations,” Col Narat explained.

However, he cautioned, “We have to investigate further and gather more information to prove who legally owns the land.”