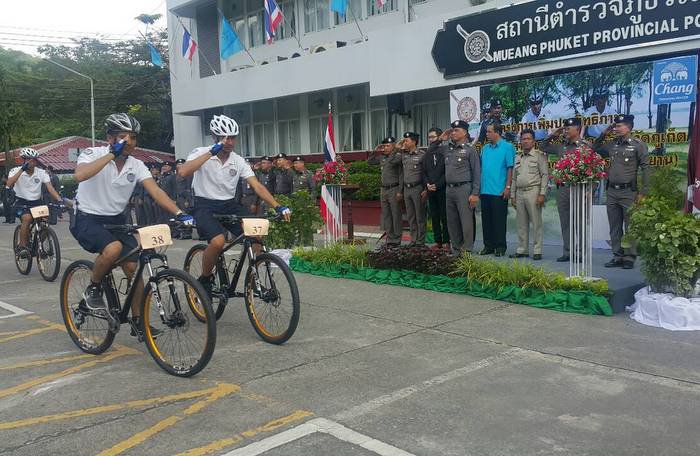 “Beach Police officers are just regular officers assigned to beach patrol. They will have the power to make arrests while on duty,” confirmed Phuket Provincial Police Commander Patchara Boonyasit. “The idea is to boost tourists’ and locals’ confidence in their safety, as well as benefit the officers’ health by having them exercise.”

Uniforms, bicycles and other necessary equipment, with an estimated value of 384,000 baht, was donated by ThaiBev. Police officers from every station on the island will use the bicycles as their main mode of transportation as they patrol the island’s beaches and main tourist attractions.

Past methods of ensuring beachgoers’ safety, such as checkpoints and car patrols were deemed unsuccessful, Maj Gen Patchara noted.

“Each station will be given four bikes for police to conduct patrols randomly throughout the day and night,” Gen Patchara said. “Officers from each station will be on a rotating schedule. Stations that do not have a beach to patrol will patrol popular tourist attractions.”

The Beach Police idea was presented to the public by Gen Patchara last November (story here).