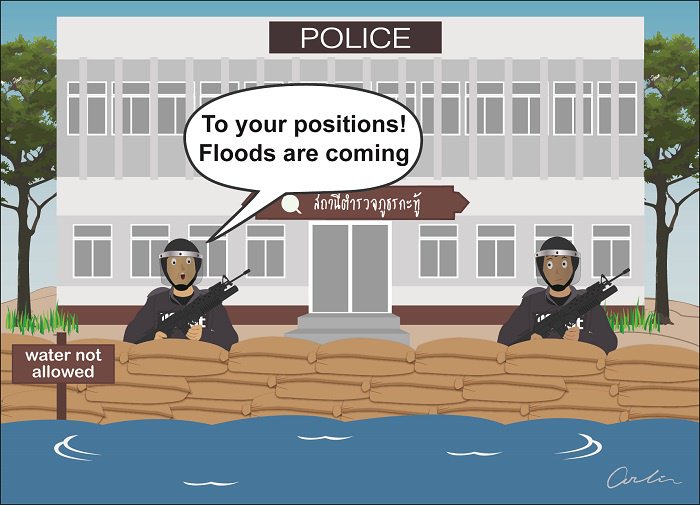 PHUKET: Recent flooding in many parts of the island will have come as little surprise to long-time Phuket residents, who have witnessed so many of the island’s natural drainage courses bulldozed and covered with concrete or asphalt over the years.

Water-related issues seem to increasingly dominate our collective, social-media-driven reality. We are told that ‘El Nino’ was responsible for the recent drought in Isarn, the worst to hit that region in many years.

Even worse, Bangkok is reportedly sinking under its own weight due to factors that include excessive groundwater pumping, decades of over-construction and poor land use management – not to mention the inherent impracticality of allowing a metropolis to develop atop an alluvial floodplain just above sea level.

Adding in the specter of rising sea levels due to climate change, some have predicted that large parts of the Thai capital could be submerged in just 15 years’ time. So potentially dire is the situation that the government is seriously talking about construction of a massive protective seawall with an equally massive price tag. The initial estimates are sitting at about half a trillion baht.

The list of our country’s water woes goes on and on, a fact which could not be more depressing given HM the King’s focus on water-related issues for decades. Alas, Thailand finds itself stuck in a situation where reports of both drought and flooding can compete for headlines simultaneously in the national news cycle.

Global warming, El Nino and other global hydrologic effects are indeed very worthy of serious study, consideration and concern. But the recent flooding here in Phuket has little, if anything, to do with these phenomena – and everything to do with shamefully poor land use planning, a lack of construction oversight and basic common sense.

Patong is the perfect example. In its natural state, the area that comprises the subdistrict is an almost perfect flood-proof catchment area. Backed by the jungle-covered hillsides of the Nakkerd Hill Range, the copious amounts of water brought in annually by the southwest monsoon was easily delivered back into nearby Patong Bay through natural channels – until “development” arrived.

Over the years, an endless series of poorly-planned projects have created the chronic flooding problem we witnessed yet again last week. It is perhaps ironic that the worst-affected area nowadays is home to many of the town’s most vital public services: the tessaban office, the local police station and Patong Hospital, to name just a few.

Recent reaction to the flooding situation in Patong has been sadly predictable: more pumps, more pipes – more budget. And It is of course unclear how putting Patong police officers on “high alert” could possibly prevent them from ending up helpless as they wade knee deep through the ground floor of their regularly inundated offices.

Better enforcement of the island-wide ban on any new structures 80 meters above sea level, sensibly introduced in 1997, could also have alleviated many of the problems we suffer today.

It is obviously too late to rectify the sins of the past, but it is time to seriously consider a moratorium on any new developments that could exacerbate existing flooding problems in Patong and other chronically flood-prone parts of the island – at whatever elevation they happen to be.

Opinion: I write for the trees