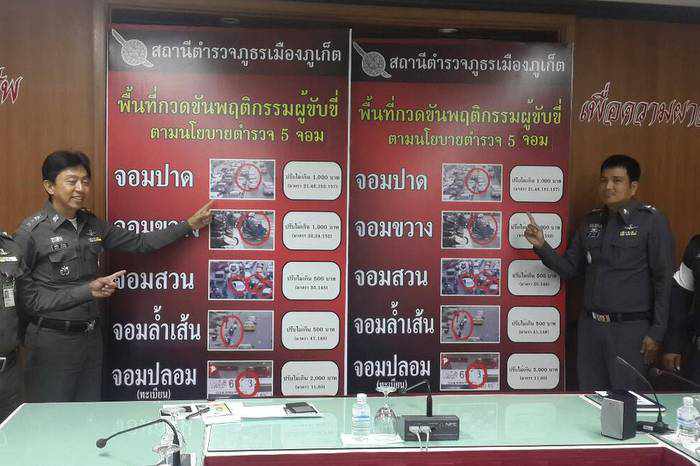 PHUKET: Police officers throughout Phuket are ready to dish out fines for motorists who violate traffic laws as part of a nationwide crackdown on road safety starting today.

The Royal Thai Police identified 199 intersections throughout the country known for being traffic-heavy and dangerous, three of which are in Phuket, said Phuket Provincial Police Deputy Commander Sakchai Limcharoen yesterday. They have ordered that officers be stationed at these junctions to be on the lookout for any law-breaking motorists.

“However, we will be monitoring all intersections throughout the island.”

Five types of drivers will be targeted and fined for violations in the clampdown: drivers who cross multiple lanes of traffic will face a fine of 1,000; those who obstruct traffic will pay 500 baht; ghostriders, or motorists who drive against traffic, will be fined 500 baht; motorists who stop at an intersection but cross over the line will be fined 1,000; and anyone caught using fake licence plates or driver’s licenses will be charged 2,000 baht.

“In addition to having officers stationed at intersections, we have CCTV footage to capture video of motorists who break the law. This allows us to send a ticket straight to the person’s house if we an officer does not catch them in the act,” said Col Sakchai.

“Last month, we had 5,000 traffic violation cases. About 70 per cent of them involved Thai nationals, and most of the violations were motorcyclists not wearing helmets.”