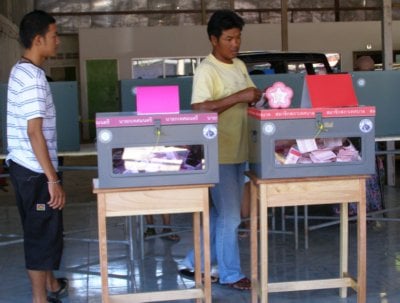 PHUKET: Municipal elections underway in Rawai, Wichit, and Rassada today have resulted in a closure of all entertainment venues selling alcohol, according to Election Commission law.

Initial reports reveal that turnout has been strong at Rassada’s seven polling stations, two of which are located near Supercheap on Thepkrasattri Rd.

“It has been very busy and we expect [voter] turnout to exceed 70% by the end of the day,” said one poll monitor there.

Bans on alcohol sales in tourist areas have long been a source of complaint among entertainment venue owners on the island, especially in some areas where the number of eligible voters is less than half the number of residents and tourists.

“I liked it better after the coup ,when martial law was in force; they never made us shut down then,” one foreign publican commented on the condition of anonymity.

The situation is not so dire for imbibers, who can still head to Patong or any of the other nightlife areas unaffected by the ban.