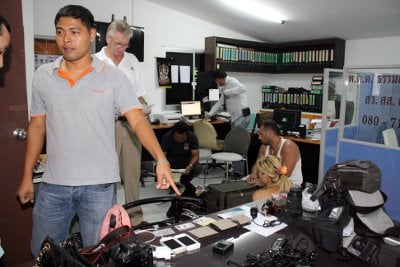 PHUKET: An Australian couple on holiday in Phuket have been arrested for filing a bogus report of being robbed in Patong with the aim of filing a fake insurance claim.

According to a police statement, the couple have have been charged with intentionally providing false information to police officers.

Maj Thammasak Boonsong of Patong Police told the Phuket Gazette today that the couple confessed to police that the robbery they reported taking place on Thaweewong Road on Sunday was fictitious.

In their confession, the couple admitted to creating the bogus robbery in order to get the proper documents needed to file a claim with their insurance company, Maj Thammasak said.

In their original report of the incident, filed with police at 11:30pm on Sunday, the couple claimed they were driving a motorbike near The Kee Resort when a man on another motorbike snatched Ms Nouha’s shoulder bag and rode off.

They described the man as wearing a helmet and a yellow shirt. The description given was similar to that of an American thief recently caught in Patong.

Police yesterday returned with the couple to the scene of the alleged theft, a popular thoroughfare near Soi Bangla, and asked taxi drivers and store owners about the incident.

However, not a single person remembered hearing or seeing the robbery, said police.

Growing suspicious of the couple’s claim, investigating officers asked them to return to the police station for further questioning.

The officers then obtained permission from the hotel manager to search the couple’s hotel room with Mr El Rajab and Ms Nouha present.

Inside the bag was the credit card she also claimed was stolen, and in the couple’s luggage police found two white iPhone 4s – also reported stolen.

“We didn’t want to charge them, but recently there have been too many complaints from the [honorary] consuls [in Phuket]. They are always receiving reports of lost belongings, such as laptops, wallets and cameras,” said Patong Police Superintendent Arayapan Pukbuakao.

“Tourists of all nationalities commit these kinds of crimes. It’s always suspicious when they file a report and leave without making any effort to recover their stolen property. When we bring them to the general area the event supposedly occurred, they usually aren’t able to take us to the exact place they described in the report,” he said.

“These types of cases have increased since last year. So now we’ll charge all of them – we don’t want them to take advantage of us for their benefit,” he said.

They were due to return to Australia today, one of the investigating officers told the Gazette.