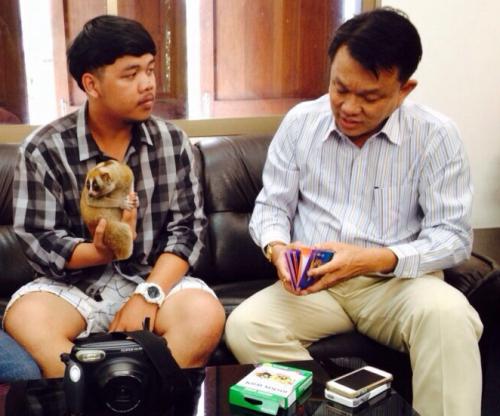 Warawuth Saiudom, 20, from Kalasin province, was caught in the act of receiving money from a tourist for having a photo taken with one of the nocturnal creatures.

“An undercover officer informed us that a slow loris tout had started operating in the day, instead of at night, in order to avoid arrest,” Mr Veera told the Phuket Gazette.

“We found the suspect in front of the Family Mart on Soi Bangla while he was receiving money from a tourist for having a photo taken with a slow loris,” he explained.

Mr Warawuth did not have a permit for the slow loris, and was brought in for questioning.

“He claimed he was only a tout who asked tourists to have their photo taken with the slow loris. He said he was given the loris by an individual simply known as Mr Wichien at 11am, before Mr Wichien rode off on a red Honda Wave motorbike,” Mr Veera said.

“He said he didn’t know where Mr Wichien got the slow loris,” he added.

Mr Warawuth was handed over to the Patong Police to be charged with possession of a protected species without a permit.

“The slow loris will be handed over to a wildlife nursery station in Phang Nga where it will be protected and cared for,” he said.