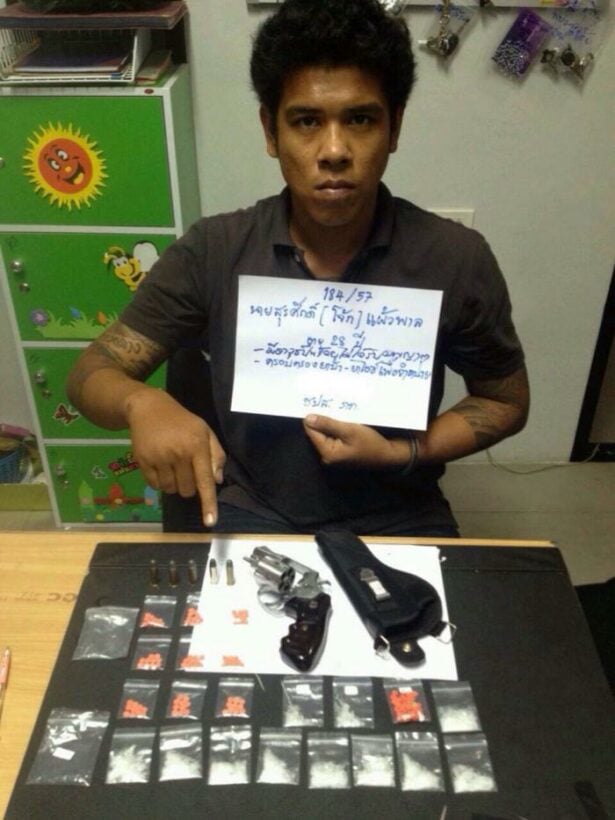 PHUKET: Police arrested an armed drug dealer in Pa Khlok this week after an inmate at Phuket Provincial Prison had his girlfriend spill the beans on the prisoner’s former business associate.

“Officers staked out the address provided by inmate Bandit Chaisit, who had his girlfriend relay the information to prison guards,” Lt Col Jarun said.

“When a man matching the description given arrived at the house, officers moved in and made the arrest.”

Inside the house, police found a .38 Smith & Wesson hand gun, five rounds of ammunition, 8.26 grams of ya ice (crystal methamphetamine) and 133 pills of ya bah (methamphetamine).

“Mr Bandit’s girlfriend said that Mr Surasak was one of the dealers in her boyfriend’s drug network and that he had sold drugs in Thalang for a long time,” said Col Jarun.

“However, I have no idea what inspired Mr Bandit to tell us about Mr Surasak. We are looking into that.”

“He was handed over to Thalang Police, who will process the charges against him,” Col Jarun added.