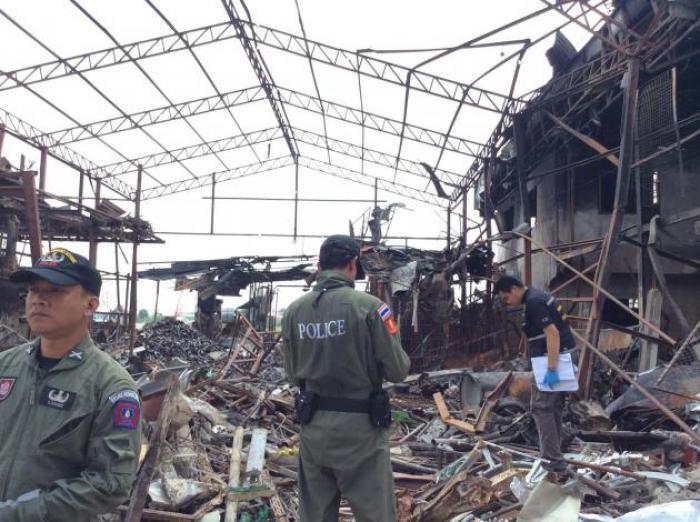 One was found during construction of the subway’s Red Line on March 27 and the Air Force was called in to handle it.

Yesterday, another one was spotted in Chachoengsao’s Plaeng Yao district. Pol Colonel Kamthorn Uicharoen of Forensic Science Police said military experts were on hand to handle the explosive there.

On Wednesday, construction workers found an old bomb in Bang Khen district and sent what they thought was an iron object to a scrapyard to sell for some cash.

“Aerial bombs are about 30 centimetres wide and one metre long. They have an oval shape,” an expert said yesterday.

Anyone coming across a suspicious item matching that description should call 02-534-3535.

The death toll from the scrapyard explosion rose to eight yesterday, while the search for missing workers was continuing.

The eighth death was confirmed only after officials found the parts of a three-year-old girl who was on the list of people who could not be accounted for.

One of the wounded, Marisa Utsah, 42, feared the worst for her husband.

“He was working at the scrapyard when the explosion happened. Now, no one can find him,” she said.

The Bangkok Metropolitan Administration is providing compensation and medical treatment for the victims.

Police estimate the number of wounded at 16-20 and smashed houses at more than 30.

“Some more aerial bombs may still be buried underground now. So, if anyone digs down and finds something suspicious, please alert officials immediately,” he said.

PHUKET: A safe house has been established nearby Aksa Road, where the pro-government red shirts plan to hold a mass rally tomorrow, and the Metropolitan Police will look after the homes of important figures in the area, director of the Centre for the Administration of Peace and Order (CAPO) Chalerm Yoobamrung, said yesterday.

Residences to be protected include the home of Suthep Thaugsuban, secretary-general of the anti-government People’s Democratic Reform Committee, he said.

Chalerm said he had visited the rally venue, and said he was not worried about violence.

He said he had learnt from Aree Krainara, chief guard for the United Front of Democracy Against Dictatorship (UDD), and Nuttawut Saikuar, secretary-general of the UDD, that there would be no marching.

The rally venue was spacious, and intelligence had found that a lot of protesters would come from the Northeast, he said.

One guard was shot dead and four others were wounded on Tuesday in a broad-daylight attack that further inflamed the political conflict.

The group from the Students and People’s Network for Thailand’s Reform, a faction of the PDRC, was returning from a rally led by Suthep at the Chaeng Wattana camp in a three-vehicle convoy when it was hit by gunfire as it was passing a tollgate and entering an expressway in Nonthaburi.

Nisit Sinthuprai, a leader of red shirts in the Northeast and director of the Red Shirts Academy, said 200,000 members would come to join the mass mobilisation tomorrow.

The People’s Radio Media Group, a red-shirt offshoot, would start its march as part of the campaign against the Constitutional Court and the National Anti-Corruption Commission by proceeding from place to place and distributing flyers detailing the injustices they believed the organisations had committed.

Spokesman Sornrak Malaithong said the marchers would start off this afternoon from The Mall Bang Kapi, Imperial World Lat Phrao and Future Park Rangsit. They would visit Bangkok’s inner areas sometime in the future but would avoid the PDRC’s protest sites, Sornrak said.

However, in her first public statement on the case, Yingluck maintained yesterday that the 2011 transfer of NSC secretary-general Thawil Pliensri to become her adviser was “in line with the legal process”. She was reacting after the court agreed on Wednesday to consider the petition by a group of senators who accused her of conflict of interest in getting Thawil transferred.

Yingluck said yesterday that she expected the court to treat her case with the same standard applied to other politicians.

Meanwhile, political observers say the case would deliver a fatal blow to the premier and her caretaker government because if she is found guilty of violating the Constitution, she could lose her post automatically and her Cabinet could also be removed.

“A political vacuum like this is not healthy and chaos will most surely follow. I’m not trying to instigate violence but I see the pressure people are under, and most Thais are hot-tempered. Chaos can break out at any time. I am not threatening the court, I’m just telling the truth,” he said.

Surapong was apparently referring to the “vacuum” that might be created if Yingluck is disqualified as premier, as she cannot be replaced by a member of Parliament because the House of Representatives has been dissolved.

“We should be aware there could be chaos in the future. We have already seen this. Whatever the PDRC does, the UDD may do that too. A non-elected prime minister may be appointed to run the country but the UDD could also besiege Government Complex,” Surapong said. He was referring to the anti- and pro-government groups, the People’s Democratic Reform Committee and United Front for Democracy against Dictatorship respectively.

Politicians from the ruling Pheu Thai Party also said yesterday that the Constitutional Court “would not spare” Yingluck in this case.

Surasit Jiamvichak, an ex-Pheu Thai MP, said it looked like the judiciary was colluding to create trouble for the prime minister as part of an effort to bring down the government.

Korkaew Pikulthong, a former Pheu Thai MP and red-shirt leader, said he expected the court to rule against Yingluck, adding that moves were being made to “distort the law”.

He warned that i