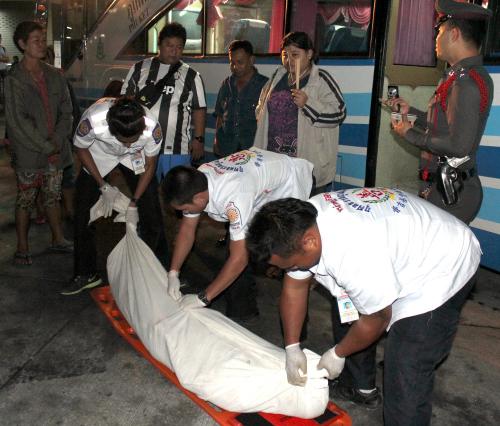 PHUKET: A festival balloon vendor was found dead on arrival at Phuket Bus Terminal 2 in the early morning hours today.

Prasan Piyawong, 66, was discovered dead on the top deck of a tour bus by a friend who was travelling with him.

Police and rescue works sped to the scene after being notified of the incident at about 4:30am today.

“Mr Prasan’s body was in the seat upright with eyes wide open. There was no sign of physical violence,” said Somchai Nhuboon of the Phuket City Police.

“The friend who was on the bus with him told us that they were travelling back from Songkhla via Hat Yai after attending a Chak Phra festival, where they had gone to sell balloons,” Capt Somchai said.

The pair sat next to each other during the long trip to Phuket. Mr Prasan quickly went to sleep and didn’t wake until he started to have spasms and a coughing fit in Thalang.

“He stopped coughing and – I thought – went back to sleep. I didn’t realize he was dead,” said Mr Prasan’s friend, who asked to remain anonymous.

When his friend was unable to wake him, he notified the bus driver who contacted police and rescue workers.

Mr Prasan’s body was transferred to Vachira Phuket Hospital to determine the cause of death, Capt Somchai said.