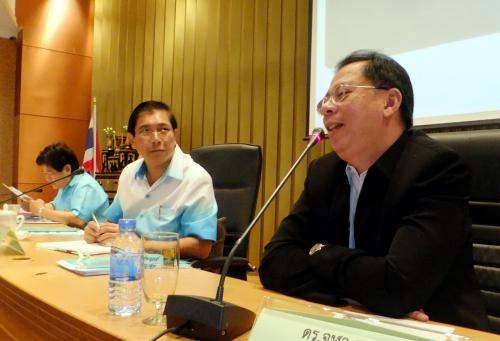 PHUKET: A feasibility study costing 118 million baht is underway for an ambitious transportation project to link Phuket with neighboring provinces.

The project aims to connect the island to the national north-south rail line and provide public transport between Phuket International Airport and Chalong Circle.

Though the current study was expected to start by the end of 2012, the contract for it was signed on September 11 this year, Phuket Governor Maitri Inthusut confirmed at a meeting on Friday.

The study ground to a halt last year when the Thai Government realized that by law it could not outsource the study to private companies (story here).

Options to be studied for solving traffic woes within Phuket include a rail or road-based transit system linking Phuket Airport to Chalong Circle, with stops on the way, explained Chula Sukmanop, Director-General of the Office of Transport and Traffic Policy and Planning.

The idea of a light-rail line connecting the airport with Phuket City, Chalong and Patong is not new. In recent years, several companies – Korean, Chinese, Singaporean and Thai, among them – have formally expressed interest in the project or even submitted preliminary studies for developing such mass-transit systems.

One preliminary proposal by Korean giant Dohwa engineering (story here) would have covered all major points on the island. The Singapore proposal connecting major points predicted a cost of 13 billion baht (story here), while an eight-month feasibility study by a Thai firm in 2006 said it would cost 20bn baht to connect the airport with Phuket City alone, with rails being laid down the middle of Thepkrasattri Road (story here).

The cost of extending the route to Patong would be prohibitive, the Thai firm said, because of the need to buy large swaths of private land and the amount of power needed to propel the vehicles over the hilly terrain.

Increased traffic and growing numbers of tourists to the Andaman coast are the motivation for the transportation mega-plan, Governor Maitri said.

“We have about 30,000 visitors arriving per day in Phuket, and that number is expected to grow,” Gov Maitri said.

“We need a long-term plan to create practical transportation for visitors and locals, and ease traffic congestion,” he said.

The current feasibility study will consider every detail of the plan, Mr Chula said, including speed and capacity, cost, environmental impact, public hearing results and whether the systems would be a sound investment.

It will also decide if rail, light-rail or road-based systems are most suitable.

From the fifth to 14th month, detailed designs will be drawn up, along with bidding documents.

Throughout the process, public hearings will be held, and every two months progress reports will be issued, according to documents supplied by the Office of Transport and Traffic Policy and Planning.