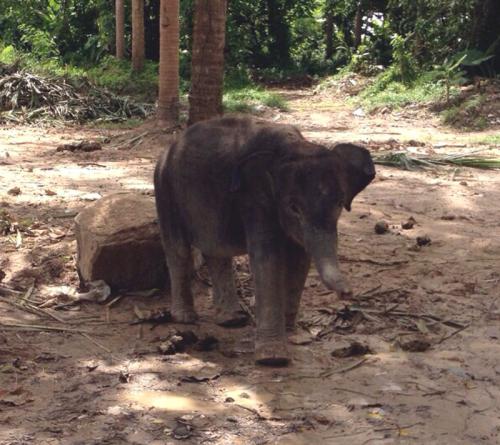 PHUKET: An elephant camp owner charged in October with illegally bringing an elephant into the province has been fined and the elephant returned to its home in Phang Nga.

Prasob Jerkae, 37, paid a 5,000-baht fine for bringing an elephant into the province without a permit, Kathu Livestock Acting Chief Jirayu Nirunwiroj told the Phuket Gazette.

A tip-off had led livestock officers to Mr Prasob’s elephant camp in Kathu on October 26. Once there, officers found Phang Sujai, an 18-month-old female elephant, chained to a coconut tree (story here).

Mr Prasob confessed to officers that he did not have the proper papers to bring the pachyderm into the province, but claimed to have legal registration documents for her.

He said he had brought her from Phang Nga to be reared and trained in the elephant trekking business, said Former Kathu District Chief Veera Kerdsirimongkol, who led the raid.

Mr Prasob was charged with importing an elephant into the province without a permit, a crime that carries a penalty of six months in prison, a fine of up to 10,000 baht, or both.

Whether or not Mr Prasob is the owner of Phang Sujai has not been determined, he added.

“We know her microchip number: 116-417-513 A,” he said. “But the number alone can’t tell us whether she was poached from the wild or stolen from another elephant camp.”

Phuket authorities are not investigating the ownership of the animal.

“That is up to the Phang Nga authorities to do. The case is finished in Phuket,” Mr Jirayu said.