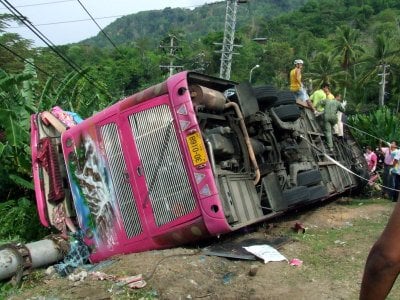 PHUKET: Many people were injured and one man is feared dead after a Patong Municipality bus returning from a funeral overturned on Patong Hill this morning.

Rescue foundation volunteers, municipality officers and rescue workers from various agencies continue to pull people from the wreckage of the bus, which came to rest about 10 meters off the road near the Sea Pearl development on Phra Barami Road.

Two men and one woman remain trapped inside the bus. It is feared one of the men may be dead, a Kusoldharm Foundation worker told the Phuket Gazette.

The crash took place at about 8:30am, a relative of one of the survivors told the Gazette.

To facilitate the rescue effort, police have blocked Patong Hill road from the Thung Thong police station in Kathu Municipality to the bottom of Patong Hill, at the Phisit Gorani Road intersection.

Thirty people have been taken to hospital, two of whom were seriously injured, a Kusoldharm Rescue Foundation worker said.

One suffered serious head trauma and the other had a compound fracture to the hand with severe bleeding, the rescue worker added.

The bus was returning about 40 Patong Municipality volunteers from the funeral of highly revered monk Luangta Maha Bua Yannasampanno in Udon Thani.

The bus was only about one kilometer short of home after the two-day, 1,160-kilometer journey when it overturned on the notorious Patong Hill road, which has been nicknamed “Mount Mayhem” for the number of traffic accidents that occur there.

Patong Municipality is currently seeking some 6 billion baht in funding to bore a tunnel under the mountain.

The town cites safety as among the reasons the mega-project is needed.