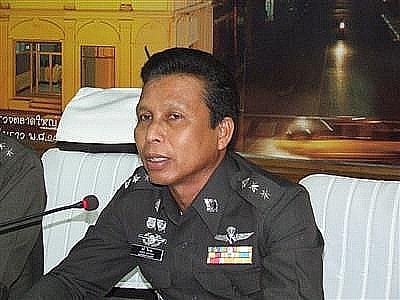 “Police are the last line of defense in society’s war on illegal drugs, so if they themselves are involved, then its ‘game over’,” Phuket City Police Superintendent Chote Chitchai told a press conference today.

“I am pleased to solve the problem, as I don’t want any police involved with drugs,” he said.

“At some time in the future, police will have their urine tested for drug use. This is part of a ‘cleaning house’ policy by the Commissioner-General of the Royal Thai Police. Meanwhile we continue to examine [members of the general public] for drug use,” he said.

The gathering was held at the Phuket City Police conference room today to show the media eight drug suspects.

The suspects, all males in their twenties, were hauled in for drug offenses over the weekend.

The seven were caught smoking Kratom leaf extract at a home in a residential estate off the bypass road in Rassada. Some were found in possession of other narcotics, so all were taken to Phuket City Police Station for testing.

All confessed to taking drugs. Seized as evidence were a total of 64 ya bah (methamphetamine) pills, three packs of dried marijuana, a bong and other drug-taking paraphernalia.

All were charged with possession of a Category I drug (ya bah) and lesser offenses.

Also presented was 23-year-old Sitthiphon Saejia, caught in possession of 49 ya bah pills and six packets of ya ice (crystal methamphetamine) on New Dowroong Road in Wichit at about 12:30pm on Saturday.

Mr Sittiphon was charged with possession and sale of a Category 1 controlled substance.

He was arrested after being stopped at a police checkpoint on Wirat-Hongyok Road, which runs behind Suan Luang Park.